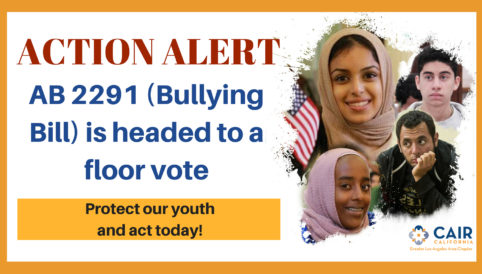 Just a few weeks ago, hundreds came out for Muslim Day at the Capitol 2018. We’re excited to share that one of the bills we lobbied for — AB 2291 – School Safety: Bullying (Chu) — has made it through the Committee process and is headed to the Assembly Floor for a vote!

We’re now calling on our community members to contact theirs representatives in the State Assembly to ask them to support AB 2291.

The Southern Poverty Law Center (SPLC) reported an increase in hate crimes following the 2016 Presidential election. According to the SPLC, a majority of the 900 incidents reported to them nationwide in the ten days following the election occurred at schools.

In 2016-2017, CAIR-CA surveyed 1,041 students between the ages of 11 and 18 who were enrolled in public and non-Muslim private schools throughout the state of California. Of the American Muslim students surveyed, 53% reported being subjected to some form of bullyingbased on their religious identity. Results showed that only 32% of students felt their problems were resolved after reporting to an adult.

Under current law, the California Department of Education is required to develop an online training module for educators on the dynamics of bullying and cyberbullying. Schools have a responsibility to ensure that educators are engaged and equipped to address bullying and harassment in our classrooms.

We need your help to advocate for this important piece of legislation that protects California’s students!

2. Require public schools to annually provide the online training module to certificated school employees and all employees who frequently interact with students.

It only takes a matter of seconds to sign a petition and make a difference in our children’s lives!