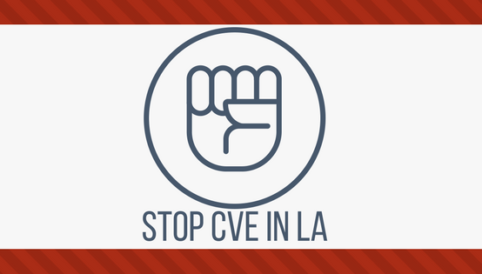 (LOS ANGELES, CA – 7/3/2018) – Amid protests from more than 50 Angelinos, the Los Angeles City Council on Tuesday delayed a vote on whether to accept $425,000 from a federally-funded Countering Violent Extremism (CVE) program targeting American Muslims, including children and youths, under the guise of providing behavioral and mental health services.

Instead of holding a vote to accept the federal funding, City Council President Herb Wesson sent the proposal back to the Public Safety Committee for further discussion. Councilman Mike Bonin argued the city should not participate in the CVE program because the federal government was “very clearly determined to racially profile.”

“If you lay down with dogs, you’re going to get fleas,” Bonin said. “And this is a flea-ridden program nationwide.”

The CVE program was met with criticism by civil rights advocates when it was launched under the Obama administration for its dangerous and ill-advised focus on American Muslim adults, children and youths. The Trump administration doubled down on this focus, both through rhetoric and action, by trying to rename the program to “Countering Radical Islamic Extremism” and by rescinding a grant to Life After Hate, a group that proposed using CVE funding to combat white supremacist violence.

Under the Trump administration, CVE grants almost exclusively focus on American Muslim adults, children and youths, with the clear majority of grants have been awarded to local law enforcement agencies, or groups who commit to coordinating with law enforcement.

“CVE is ineffective and at its core, targets and stigmatizes American Muslim adults, children and youths,” says CAIR-LA Civil Rights Managing Attorney Marwa Rifahie. “The City of L.A. must protect the civil liberties of all its residents and reject the institutionalized profiling and surveillance that the CVE program will subject Muslim American children and youths to.”

CAIR-LA and its coalition partners have been fighting to ensure that CVE stays out of Los Angeles for practically two years, meeting with city officials and educating the public on the importance of saying No to CVE.

“We will continue to fight and work to ensure that the City of Los Angeles does not align itself with the Trump administration’s racial profiling policies that seek to target and profile minorities, immigrants and Muslims” said CAIR-LA Policy Manager Asmaa Ahmed. “By standing up and speaking out, our community has shown Los Angeles and the rest of the nation the power of solidarity in the face of injustice. “

The earliest the Public Safety Committee could return the issue back to the City Council with a recommendation for approval would be in August.

In February and July of 2017, CAIR-LA and its allies filed California Public Records Act requests about the CVE program to understand the full scope of the City’s programs and to assess their civil rights and liberties implications. CAIR-LA and its allies filed a lawsuit against the city, because its requests were met with long delays and incomplete information on how the grant funds will be used. The lawsuit demands full transparency regarding the grant, including any instructions and conditions imposed by federal officials.

“The need for information is even more imperative now under the Trump administration, which has unleashed a number of Islamophobic policies including the Muslim travel ban,” said Laboni Hoq, litigation director of Asian Americans Advancing Justice – Los Angeles. “With this lawsuit, we intend to arm impacted community members with the information they need before participating in CVE programs, if they do go forward in L.A., which we oppose as discriminatory and ineffective.”