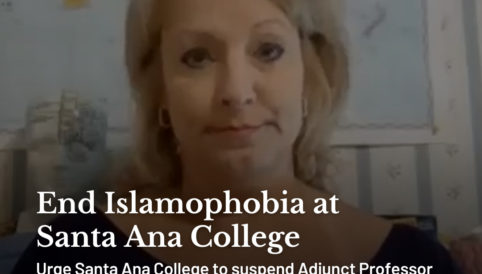 Adjunct Professor Jamie McDonough, currently teaching at Santa Ana College, was recorded during her lecture making derogatory and biased comments about the roles of men and women in the Muslim world. Her statements included blanket generalizations that perpetuate anti-Muslim stereotypes and biases. She went so far as to depict Muslims—a global faith community of nearly two billion—as a “complete patriarchal society” in which “men dominate women.”

CAIR-LA was sent a recording of the lecture and promptly brought the issue to the attention of the college. Upon notice of the Islamophobic discourse, Santa Ana College launched a 90-day investigation into the matter. However, it is not enough that the college conducts an investigation into these remarks while the educator who made them continues to influence students in the classroom. Ms. McDonough must undergo extensive cultural sensitivity training prior to resuming teaching at the college.

CAIR-LA is calling for Santa Ana College to remove Ms. McDonough from teaching during the 90-day investigation period.

The Muslim community and its allies must continue to call on Santa Ana College to take decisive action to end Islamophobia and correct harmful rhetoric in spaces of higher educational learning. Please take a minute to complete this action alert today and show Santa Ana College that we do not accept this behavior.