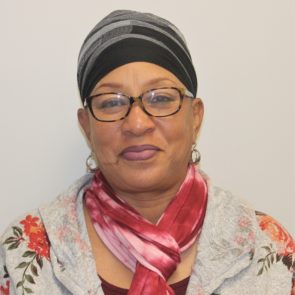 Raised in Sacramento during the 60’s, when grassroots movements were standard in communities of color, Atra became aware of her community’s needs as a youth.

After moving to L.A. in 1996, Atra’s life was turned upside down when her only child, a son, was wrongly convicted of murder and given three life sentences without the possibility of parole. The family immediately filed an appeal. He was finally exonerated after 19 years and released in 2016.

In 2018, she became an active member of MuslimARC. As an ​American Muslim Anti-Racism Leadership ​ (AMAL) fellow, she is part of the MuslimARC’s three-person team accepted into the Next Generation of Leaders of Color Inland Region​ 2019-2020 Cohort, which is organized by Compass Point nonprofit services.

She was accepted into Community Coalition’s Organizing fellowship last year. The work she does with CAIR-LA, Essie Justice, MuslimARC and Community Coalition builds upon decades of her personal advocacy to empower and advance the lives of black and brown people in her community.

Atra makes and teaches others how to make soap, bath bombs, lotions and body butters in her spare time. She considers the hobbies as cathartic.