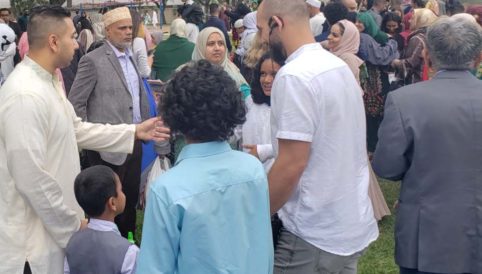 For the many American Muslims marking the close of Ramadan this week, the last month has been marked by greater-than-ever security precautions at mosques across the country. Amid concerns over a heightened spate of violent hate crimes in the United States and abroad, community leaders and local law enforcement are taking greater precautions to ensure that they are able to practice their faith in peace. …

(CAIR-LA spokesman Eugene) Fields says that, at the roughly 90 mosques in the Greater Los Angeles area, there was no marked increase in hate incidents this Ramadan. Across the county, “law enforcement took it upon themselves to reach out to Muslim communities and do extra patrols,” he says. “We are very appreciative of local law enforcement making sure people can practice their religious freedom in safety.”