(ANAHEIM, CA 11/03/2015) – On Friday October 30, the California chapter of the Council on American-Islamic Relations (CAIR-CA) held simultaneous news conferences at their Anaheim, San Diego and the San Francisco Bay Area offices announcing the release of a new statewide report on school bullying.

During the news conferences Friday morning, CAIR-CA attorneys detailed keys findings of the report including: 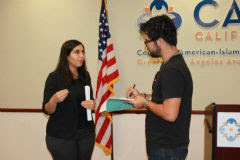 CAIR-LA Senior Civil Rights Attorney Fatima Dadabhoy stated, “Today anti-Muslim rhetoric has become so acceptable that parents and students feel that it is a normal part of being a Muslim in America.”

Parents of students also shared the experiences of their children.

Melinda Van Stone, a mother whose son was told to draw the Prophet Muhammad for a history assignment spoke of how the school administration dismissed her concern of the insensitivity of the assignment towards the Islamic faith. She explained how, rather than understanding why such an assignment would be offensive, the school defended it. As a result of her complaints, she believes her son is now being retaliated against by school officials.

Sameera Dadabhoy, a mother of a sophomore high school student and a seventh grader, stated in the press conference that both her sons experienced some form of bullying and discrimination in school from classmates for being Muslim. Sameera emphasized that both her sons are hesitant to report their situation out of fear that it may become worse. The adverse affects of bullying and discrimination has left them feeling defeated.

The statewide press conferences were covered by over ten TV, radio and print media outlets. See below for local coverage.

CAIR-CA is a chapter of CAIR, America’s largest Muslim civil liberties and advocacy organization. Its mission is to enhance the understanding of Islam, encourage dialogue, protect civil liberties, empower American Muslims, and build coalitions that promote justice and mutual understanding.