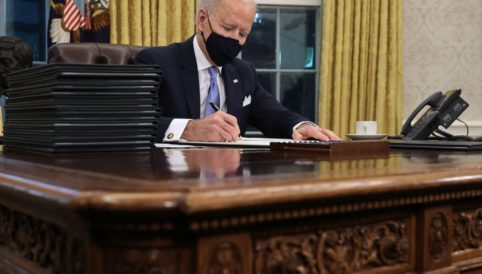 The California chapter of the Council on American-Islamic Relations (CAIR-CA) today welcomed President Joe Biden’s announced termination — on his first day in office — of the previous administration’s discriminatory Muslim and African Bans.

Leaders from the organization released the following statements:

“Repealing the Muslim and African Ban is an important first step toward undoing the anti-Muslim and anti-immigrant policies of the previous administration.

“We will continue to advocate for the elimination of systemic injustices within the federal government that have resulted in the religious and racial profiling of Muslims and immigrants under past administrations.

“We commend President Biden for immediately moving to fulfill his campaign pledge to the Muslim community and its allies to repeal the Ban.

“CAIR-LA also welcomes the Biden Administration’s move to preserve and fortify protections for Dreamers; inclusion of all persons – including the undocumented – in the U.S. census count; ordering the removal of barriers preventing minorities and underserved communities’ access to federal programs and institutions; and other impactful executive orders.”

“Today, after a historic inauguration, we celebrate the end of the cruel Muslim and African Bans that tore countless families apart. We hope these families can heal from the devastating impacts of this policy. There is so much work to be done to right historical and more recent wrongs, but this is an important first step.”

With the repeal of the unconstitutional Muslim and African Ban, thousands of Americans can now breathe a sigh of relief; there is hope for families to reconnect with each other. We commend President Biden for keeping his promise to toss out this unjust ban on day one, and we look forward to seeing this administration continue to fix the structural barriers that plague our nation.”