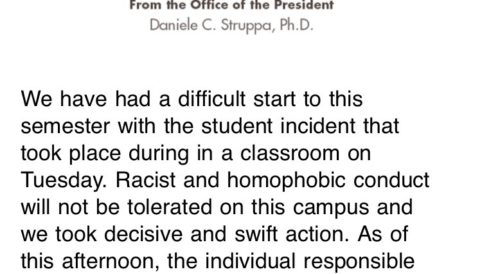 “Racist and homophobic conduct will not be tolerated on this campus and we took decisive and swift action. As of this afternoon, the individual responsible for this incident is no longer a student at Chapman University.”

According to the Chapman University Panther, the student, identified as Dayton Cole Kingery, was detained and arrested by the Orange Police Department on Feb. 4 on charges of felony vandalism, assault and not cooperating with officers.

In his statement, Struppa also pledged the university would offer additional resources and provide support to the campus community.