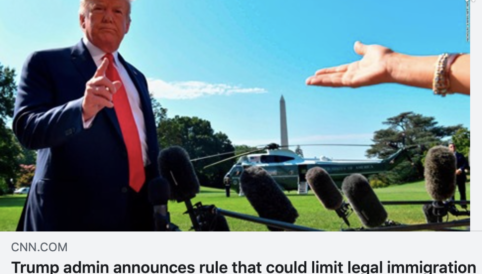 (LOS ANGELES, CA – 8/13/2019) – The Greater Los Angeles Area office of the Council on American-Islamic Relations (CAIR-LA) today joined with its national chapter to condemn a Trump administration change to immigration rules that would give the government wide-reaching ability to deny green cards for those who have participated in public aid programs.

Current immigration law classifies immigrants who are dependent on the government for more than half their income as “public charges” and prevents them from obtaining green cards and visas. The new rule would expand the definition of public charge to include anyone receiving food stamps, Medicaid and housing subsidies or who is deemed “likely at any time” to do so.

The change, first announced in September and finalized today, affects more than 380,000 people. It will be published in the Federal Register on Wednesday and will go into effect 60 days later.

“This change by the Trump administration is both draconian and cruel to immigrants, who comprise nearly 35% of the population in the greater Los Angeles area. They will be forced to make a choice between continuing their path to citizenship or accessing essential health care, feeding and/or providing a home for themselves and their dependents. We continue to stand with the 1,100 organizations across the nation that strongly oppose the rule change.”

“This is a policy that will keep immigrant communities marginalized and will inevitably create a socioeconomic hierarchy in our immigration system. It could quite literally kill people by making them too afraid to seek life-saving medical care.”

McCaw also urged Congressmembers to cosponsor the No Federal Funds for Public Charge Act of 2019 (H.R. 3222) which would nullify the new policy.

Learn more about the rule and its effects here:

CAIR joined more than 1,100 other organizations in an open statement strongly opposing the rule change when it was proposed last year. The Washington-based civil rights organization also submitted a petition with more than 500 signatures to the Federal Register calling on the Trump administration to withdraw the rule.