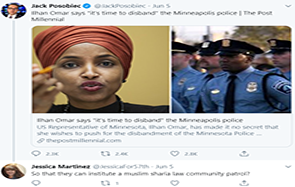 Martinez was elected to the Whittier City Council in March 2020. According to her biography on the City of Whittier website, she is also a public-school teacher. Martinez has a long history of posting bigoted material on Twitter:

“It is beyond the pale that this Islamophobic, bigoted material would be found on the Twitter feed belonging to an official elected to serve the public. She is demonizing members of her constituency.

“Council Member Martinez has shown herself to be an equal-opportunity bigot and her social media comments are beneath the office she currently holds.

“The current trend of normalizing hate speech in the Trump era – especially from people in leadership positions – has emboldened bigots in their speech, as well as their actions. We call on Council Member Martinez to resign for her position and for the Whittier City School District to investigate whether she has made inflammatory statements in her classroom.”