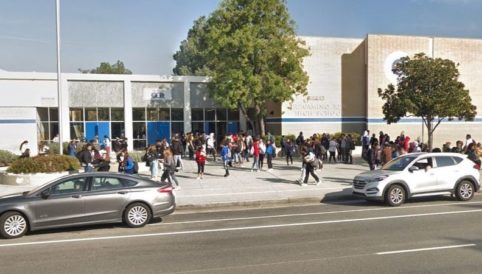 According to the L.A. Daily News, the flyers – printed with swastikas and offensive messages equating Nazism with Zionism and the state of Israel – were found near El Camino Real Charter High School in Woodland Hills and Nestle Avenue Charter Elementary School. The Los Angeles Police Department is investigating the incident as a hate crime.

In a statement, the L.A. Unified School District wrote:

“Los Angeles Unified condemns acts of anti-Semitism and any other symbols of hate. This is the responsibility for everyone, inside our schools and within our community. While Los Angeles Unified remains committed to educating students about cultural and religious diversity and the important values of tolerance and inclusion, we encourage this educational process to continue throughout the community.”

“Anti-Semitism, xenophobia and bigotry in any forms are unacceptable. We continue to stand in solidarity with the Jewish community and all other targeted minorities and against the actions of bigots who violate our nation’s long-standing principles of religious tolerance and inclusion.

“The current trend of normalizing hate speech has emboldened bigots in their speech, as well as their actions – as evidenced by the massacre of 50 people at a mosque last week in New Zealand and the slaughter of 11 people at a synagogue in Pittsburgh less than five months ago. We commend the LAPD for investigating this incident as a hate crime.”

Earlier this month, Nazi imagery pictured at a teen party attended by Newport-Mesa Unified School District students that was circulated over social media drew criticism. The next week flyers were found at Newport Harbor High School.

“We will continue to stand up and defend our fellow community members in the face of hatred,” Ayloush said. “Hate will not prevail.”