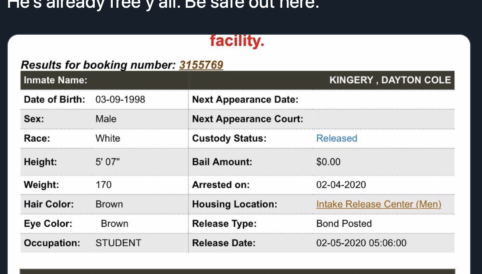 (LOS ANGELES, CA – 2/6/2020) – The Greater Los Angeles Area office of the Council on American-Islamic Relations (CAIR-LA) today denounced the bigoted comments made Feb. 4 by a student at Chapman University.

In a video uploaded to Twitter, the student filmed repeatedly saying, “I (expletive) hate (N-word).” The student was also filmed using homophobic slurs.

According to the Chapman University Panther, the student, identified as Dayton Cole Kingery, was detained and arrested by the Orange Police Department on Feb. 4 on charges of felony vandalism, assault and not cooperating with officers.

In a statement, the Office of Chapman President Daniele Struppa said that appropriate legal and disciplinary processes are being implemented.

“We stand unequivocally in denouncing the hateful language and behavior exhibited by this student. It is unfortunate that an institution of learning became the platform for someone to spew vitriol and bigoted rhetoric, especially during Black History Month, a time devoted to celebrating the accomplishments and contributions of African Americans. An attack against one marginalized community is an attack against all of us. This type of language is absolutely unacceptable and is indicative of how normalizing hate speech can lead into hate threats and hate attacks. We are grateful the administration at the university is addressing this issue.”