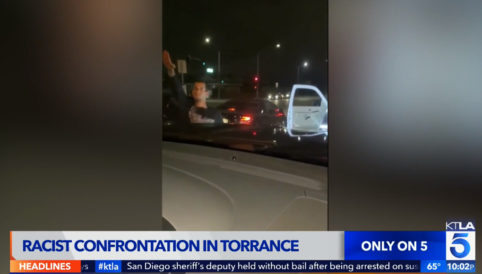 (LOS ANGELES, CA – 7/24/2020) – The Greater Los Angeles Area office of the Council on American-Islamic Relations (CAIR-LA), part of the nation’s largest Muslim civil rights and advocacy organization, today denounced an alleged hate crime at a stoplight in Torrance during which two people were the targets of a racist rant.

According to KTLA/5, Itzel Lopez and her boyfriend were driving home from dinner on Wednesday night and were cut off at a red light at the intersection of Artesia Boulevard and Prairie Avenue.

The driver and passenger got out of their vehicle and approached Lopez and her boyfriend’s truck, which is when Lopez started recording.

Lopez and her boyfriend were able to record the truck’s license plate number and report it to police. Torrance police are now investigating the incident as a hate crime.

“We are grateful neither the woman who filmed this incident nor her companion were injured. CAIR-LA welcomes the quick response of the Torrance Police Department to investigate this matter as a hate crime and we stand against hatred and xenophobia in all forms.

“We have warned that normalizing hate speech leads directly to hate threats and hate attacks. The increase in threats and violence are the direct result of irresponsible attacks from the highest levels made against members of marginalized communities.”