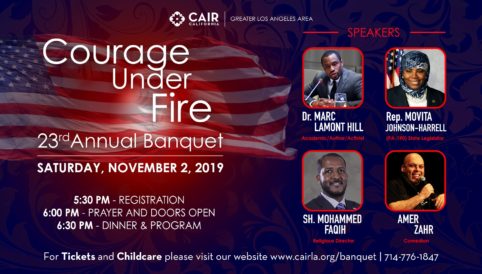 Hill is a civil rights activist, an award-winning journalist, the host of BET News and a professor at Temple University. Johnson-Harrell was elected to serve as state representative for the 190th Legislative District, Philadelphia Count in March 2019. She is the first Muslim woman to serve in the Pennsylvania House of Representatives. Faqih served as the imam at the Islamic Institute of Orange County for 13 years and is currently the imam at the Memphis Islamic Center. Zahr is an Arab-American comedian, speaker, writer, academic and adjunct professor at the University of Detroit Mercy School of Law.

Every year, the CAIR-LA banquet attracts more than 2,000 members, including interfaith leaders, elected officials and community activists from across Southern California, making it the largest American Muslim banquet on the West Coast.