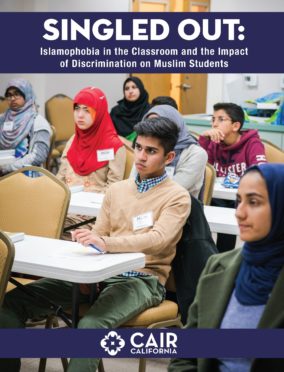 In this report, the California Chapter of the Council on American-Islamic Relations (CAIR-CA) provides an analysis and evaluation of the current public school climate for American Muslims in California. The purpose of this report is to understand the extent to which Islamophobia, defined as the closed-minded prejudice against or hatred of Islam and Muslims, manifests itself in the school environment in the form of bullying and discrimination. As such, this report focuses on anti-Muslim bullying: the unwanted, aggressive behavior among school-age children or perpetrated by educators and administrators that involves a real or perceived power imbalance based on the student’s Islamic faith.

As the Trump administration continues to promote Islamophobic rhetoric and policies in the mainstream, many students, parents, and educators fear the negative impact the normalization of Islamophobia could have on Muslim students and the Muslim population in the United States as a whole. In the face of this challenge, CAIR-CA has continued to advocate zealously to best protect civil rights and empower American Muslims. This report shows the impact of CAIR-CA’s advocacy over the past seven years. CAIR-CA’s continued legislative efforts and direct legal services combating anti-Muslim bullying are specifically outlined in this report.