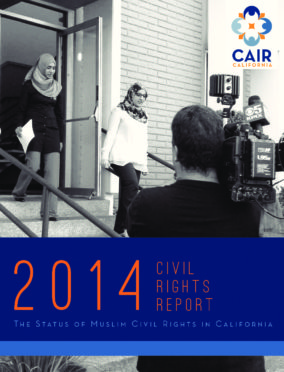 California Muslims reported incidents to CAIR-CA where they were scrutinized by federal law enforcement agencies and local police and where they faced discrimination in the workplace, including harassment from co-workers and managers, denials of religious accommodation requests, and retaliation after complaining about harassment or requesting religious accommodation. Local Muslims also reported intensive searches and delays while traveling and delays when they applied for visas for family members overseas. Moreover, as a result of CAIR’s newly launched Muslim Youth at School Project, parents contacted CAIR-CA after their children were bullied by peers or harassed by teachers. All the reported incidents took place in various locations, including airports, the workplace, schools, and private businesses.

Complaints of employment discrimination made up the largest number of complaints in California numbering 141 or 15.1% of complaints. The next most frequent type of complaint involved immigration issues, including visa and naturalization delays and refugee and asylum issues. The CAIR-LA office decided to invest in a full-time immigration attorney due to the large amount of immigration cases coming into their office. The third most frequent type of complaint involved Federal Bureau of Investigations (FBI) and law enforcement, including instances of community members approached for voluntary questioning by the FBI, Department of Homeland Security (DHS), or Joint Terrorism Task Force (JTTF) agents, as well as community members who contacted CAIR-CA because they were concerned about the possibility of law enforcement surveillance. These complaints numbered 101, or 10.8%, of the total complaints received. The remainder of complaints received were issues about travel, family law, school bullying and accommodation, higher education, criminal defense, public accommodation access, prison, housing, land use, and zoning.

Complaints received in 2013 show an increase from the prior year during which CAIR-CA received a total of 854 complaints. This increase could be attributable to an increase in CAIR-CA’s staff capacity, additional outreach efforts, increased Islamophobia, or other factors. CAIR-CA’s offices remain vigilant in observing data trends that may indicate an increase in hostilities directed towards the American Muslim community.