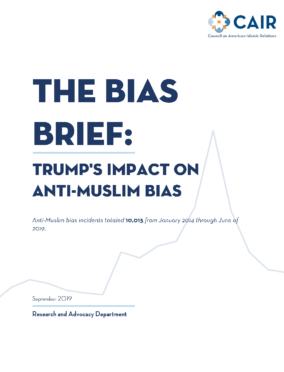 It is no secret that our nation’s politics and culture have become more polarized since Donald Trump entered the presidential elections in 2015 and then became president. His divisive and xenophobic rhetoric has targeted Mexicans, African Americans, Muslims, and anyone with differing views as un-American outsiders. Most alarming however, this rhetoric has translated into policy, dangerously impacting the lives of millions both here and abroad. Muslims have been at the center of President Trump’s hateful wrath and CAIR has closely monitored its impact and fought to stop the flood of bias and bigotry affecting American Muslim communities. This report provides a top-level summary of the rise of bias incidents and hate crimes as reported to CAIR offices from 2014 to 2019, the time period corresponding to Trump’s entrance into national politics.

The results are alarming: a total of 10,015 anti-Muslim bias incidents, with measurable spikes in 2017 after the declaration of the Muslim Ban. Like other hate-crime reporting mechanisms, CAIR’s numbers are assumed to be far below the reality. Other findings during the 2014-2019 period include:

• An increase in the violent nature of bias incidents: 1,164 anti-Muslim hate-crimes, including physical assault and property damage.
• The highest spike in bias incidents occurred in 2017 with 2,599 incidents —a 94% jump over 2014 levels, as a result of the Muslim Ban
• An increase in incidents involving federal agencies: 2,783 acts of bias or discrimination by agencies including the FBI, TSA, and Customs and Border Patrol (CBP).
• The FBI is the most common type of federal government agency for which American Muslims report acts of bias, accounting for almost half of the total number of cases reported against federal agencies: 1,177 total bias incidents.
• The most frequent type of abuse, aggregated from 2014 through June of 2019, was harassment, defined as unwanted, unwelcomed and uninvited conduct which annoys, demeans, or offends the target and results in a hostile environment for the target.
• CAIR chapters recorded 506 anti-Mosque incidents.
Read Publication