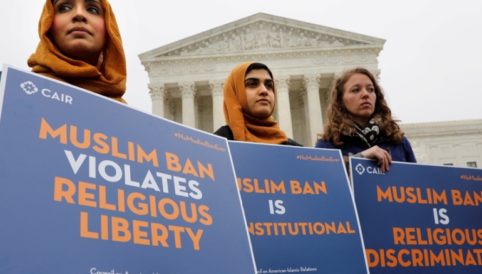 CAIR’s newly released “Islamophobia in the Mainstream” report shows that Islamophobic organizations remain active and continue to receive large sums of money through private family foundations and mainstream donor-advised funds that are ultimately used to spread misinformation and perpetuate harmful stereotypes about Muslims and Islam.

Here are some key findings in the report:

Students continue to face physical and verbal abuse for being Muslim and do not feel comfortable expressing their Muslim identity and engaging in classroom discussions about Muslims and Islam.

CAIR identified 16 anti-mosque incidents between 2019-2020, including incidents of damage, destruction, and vandalism, intimidation, and harassment.

Individuals with a history of anti-Muslim rhetoric were appointed to serve in government during the Trump-era, prompting the administration to push anti-Muslim policies.

With your support, CAIR will continue pulling back the curtain to expose hate and ignorance. Together, we can pierce the secrecy that has protected the Islamophobia network from the light of truth. Ready to join us in the fight against Islamophobia?