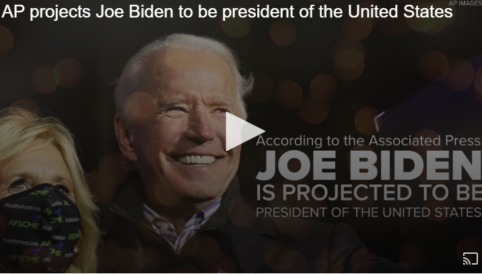 (LOS ANGELES, CA – 11/7/2020) – The California Chapter of the Council on American-Islamic Relations (CAIR-CA), the nation’s largest Muslim civil rights and advocacy organization, today joined its National office in congratulating President-elect Biden on his victory and encouraged the incoming administration to promote civil rights, racial equality, a just foreign policy, and the inclusion of American Muslims in diverse government roles.

“CAIR congratulates President-elect Joe Biden on his electoral victory, and for building an inclusive election campaign focused on the unity of our nation.

“President-elect Biden has pledged to end the Muslim Ban on his first day in office, include Muslims at every level of his administration and address issues of racial and religious discrimination.

“We plan to join other American Muslim leaders and organizations in ensuring that the Biden administration fulfills these promises. We also plan to continue holding our government accountable when it errs.”

“On behalf of CAIR-CA, I congratulate President-Elect Joe Biden on his electoral victory. The process of healing our country and repairing the damage to our country’s justice system, race relations, social harmony, and image begins today.

“CAIR-CA is committed and ready to engage with the Biden administration to ensure that campaign promises are fulfilled. We have new opportunities to advance just and equitable domestic and foreign policies.”

Awad said the American Muslim community is a key resource for state and national policy-makers and is urging Congress and President-elect Biden to enact and implement the following civil rights reforms: