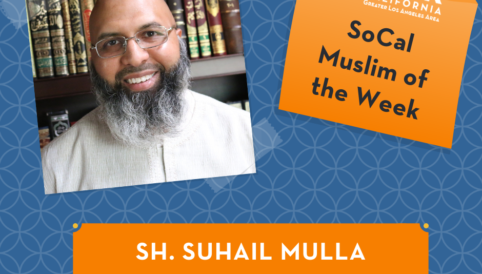 CAIR-LA is pleased to feature Shaykh Suhail Hasan Mulla as the SoCal Muslim of the Week.

Shaykh Suhail Mulla describes his work at the Khalil Center in Northridge as an intersection where religion and mental health meet.

“In several of those spaces, there are more of those services in the religious end and there are the others where mental health is the focus,” Mulla said. “But we try to help people as much as possible.”

Mulla is director of the center – described as “a social and spiritual community wellness center designed to address the widespread prevalence of social, psychological, familial, relational and spiritual issues of communities.”

It opened two months ago.

He also serves as a Muslim chaplain at the Institute of Knowledge at UCLA and Cal State Northridge University and a resident scholar at the Islamic Society of West Valley in Canoga Park.

A native Angeleno, Mulla earned a bachelor’s degree in Pan-African studies at Cal State Northridge, a master’s in social welfare from UCLA and another bachelor’s in Shariah (Islamic Law) from the distinguished Islamic al-Azhar University seminary in Cairo. Mulla completed a two-year Islamic studies program at Al-Asheera Al-Muhammadiya in Cairo, where he studied privately with numerous Azhari scholars.

Previously, Mulla worked as a social worker in the Los Angeles Unified School District and served as an imam at the Islamic Society of Orange County in Garden Grove.
In his free time, Mulla enjoys hiking, camping, backpacking, woodworking and gardening.

Personal: Mulla and his wife, Lobna, a Muslim scholar too, reside in Northridge with their four children.
Last book read: “The 9th Century Psychologist” by Abu Zayd al-Balkhi
Quotable: “Islam is my compass. It guides me in terms of how to live, why I live, where I came from and where I’m going. It’s the path that I follow. When I found it, Islam put me on a path and now I know where I’m going in life.”