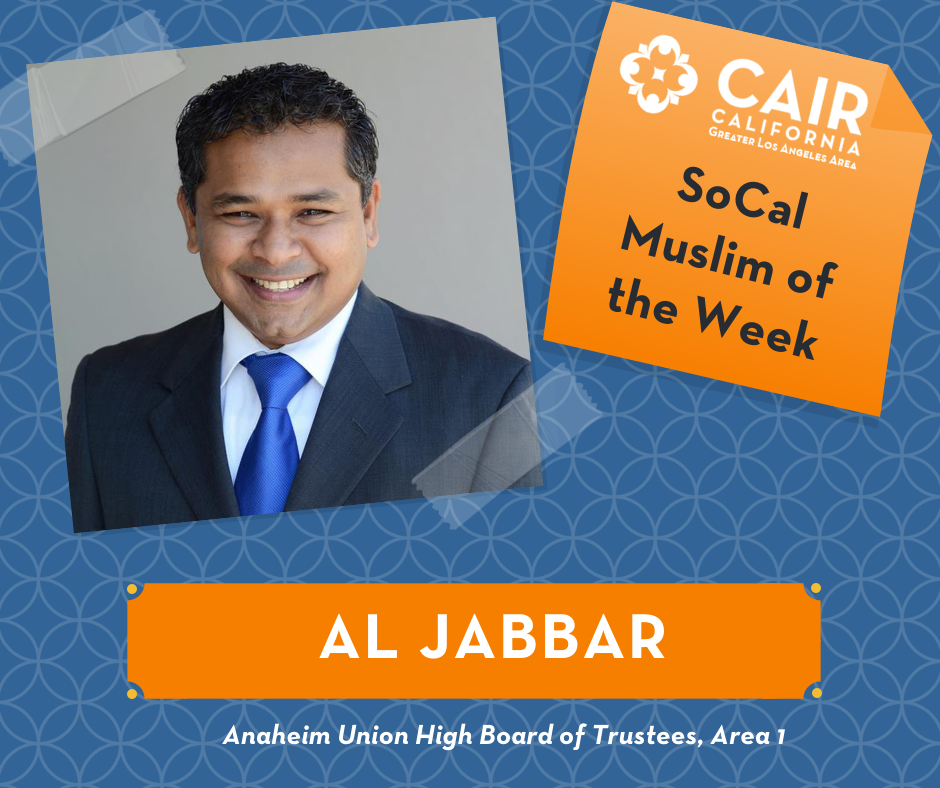 Even as a child, Al Jabbar was attracted to politics.

“I was pretty active back home in Sri Lanka when I was growing up,” said Jabbar of his native country, which he left in 1996 to migrate to Orange County with his family. “I was very active with student associations and I think what got me going was my dad. He was very much into politics. I guess you could say it was in my blood.”

For the son of retired lawyer Mohamed Ismail Abdul Jabbar and retired school teacher Ainool Khair Jabbar, education also has been a top priority. Jabbar, this week’s CAIR-LA SoCal Muslim of the Week, has been a pivotal leader on the Anaheim Union High School District board of trustees since he was appointed in 2013.

Jabbar was re-elected earlier this month to serve a second term. In 2014, when he was initially elected, Jabbar became the first Muslim to capture any office in Orange County and the first Sri Lankan to claim one in the U.S.

As a member of the board of trustees, Jabbar and his colleagues oversee the district’s budget. They also hire and evaluate personnel, including the superintendent.

But as meaningful as those tasks are to Jabbar, he takes even greater pride in the Anaheim Innovate Mentoring Experience and the Anaheim Pledge, which he helped create. The mentoring program assists students in the district in landing internship programs, which include mentorships with some of the top CEOs in Southern California. The pledge is a partnership with area colleges that provides free tuition for freshman and prioritizes them for registration and transfers to larger universities.

“Those are programs I’m very proud of,” Jabbar said. “I love bringing those type of programs and implementing those types of programs because it gives kids who don’t have the wealth or connections to get connected to programs like this. I see it as a challenge and a blessing that I’m trying and able to help students and educate them for our future.”

Personal: Jabbar and his wife, Sameeha, live in Anaheim with their daughter and son.

Professional: A department manager with the Orange County Health Care Agency for the past 12 years; past president of the Sri Lanka Muslim Association of California, which serves 1,200 to 1,500 members. Jabbar continues to serve as an adviser.

Quotable: “I think my faith is what keeps me grounded,” Jabbar said. “For the most part, I look at how I was brought up and I was brought up on faith. Praying five times a day and putting things into perspective makes you humble when you’re reminded that there is a higher power. Those are things I learned as a kid. When I’m making decisions now, I think of the justice part of it and who might not get represented because they’re a minority. That’s something I’ve done all along. I’ve been making decisions for people who are underrepresented in the community.”