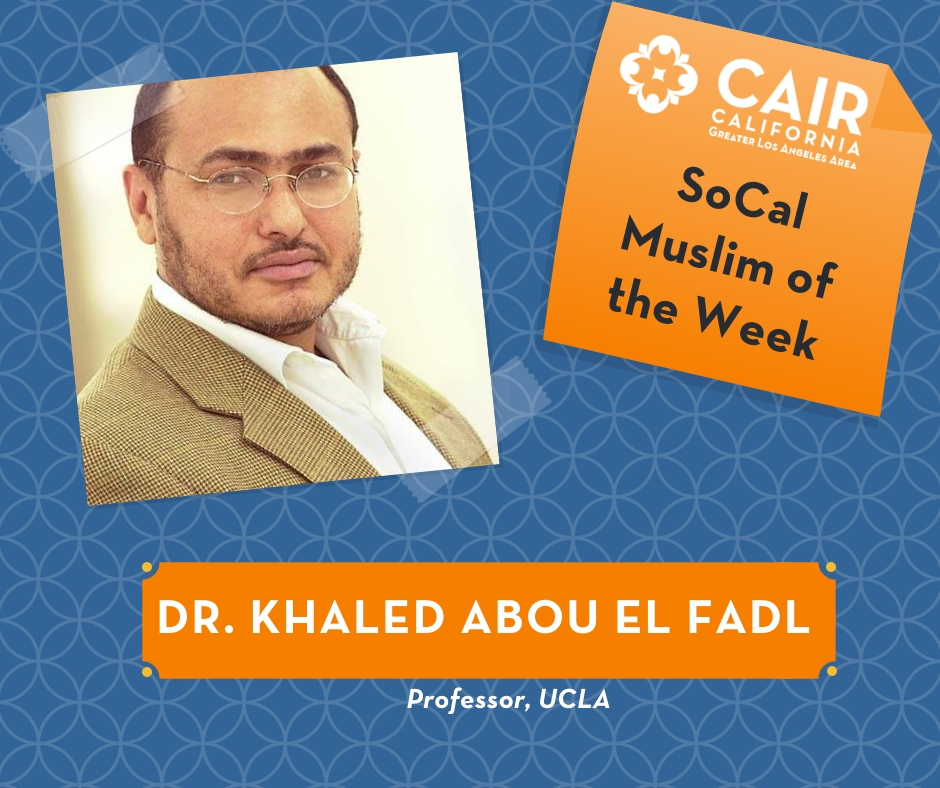 Fighting Islamophobia, contesting the Muslim ban and continuing to protest the injustices and ignorance promoted by the Trump administration and his ilk are among the challenges facing American Muslims, noted scholar, activist and writer Dr. Khaled M. Abou El Fadl says.

“You have to organize, be active and put your money where your rights are,” Abou El Fadl says.

Abou El Fadl is the Omar and Azmeralda Alfi Distinguished Professor in Islamic Law at the UCLA School of Law, where he teaches courses on Islam and human rights, Islamic jurisprudence, international human rights and others. He is also the founder of The Usuli Institute, a nonprofit educational organization dedicated to elevating knowledge, beauty and critical thinking in the Islamic intellectual tradition.

“The Muslim ban is a consequence of something bigger,” says Abou El Fadl, the author of 12 books on an array of topics regarding Islam. He also is an Islamic jurist. “If the ban would have affected the U.S. financially and politically, it wouldn’t have happened. It’s a political problem affecting Muslims in the U.S., but it’s a much deeper problem of Islamophobia. What is a far more serious challenge to Muslims in the U.S. is the challenge of overcoming racism.”

He applauds CAIR-LA for working toward that goal.

“I think organizations like CAIR receive resistance because of what they stand for and the fact that they stand up for peoples’ rights. That’s a great thing,” Abou El Fadl says.

But the professor is critical of some of his Muslim colleagues in academia.

“They go out of their way to speak as an objective, secular voice,” he says. “They just gain nothing by white washing themselves. It’s really a shame. I try to encourage my students that once you identify yourself as Muslim be prepared to be discriminated against. But that also happens to any black activist who speaks out. You must have the strength to speak out. You can’t respond to racism and bigotry by pretending to be a white person.”

Additional contributions: Abou El Fadl frequently appears on national and international networks commenting on issues affecting Muslims. He also writes opinion pieces for publications such as the New York Times, the Washington Post and the Los Angeles Times, among others.

Last book read: “The Story of Reason in Islam” by Sari Nusseibeh

Quotable: “My entire academic career has been a reflection of my faith. In very concrete ways, I’ve done a lot of work in the human rights field because I believe that’s what my faith calls me to do, to advocate for the rights of human beings. I believe my faith demands protection for the disempowered and the vulnerable.”