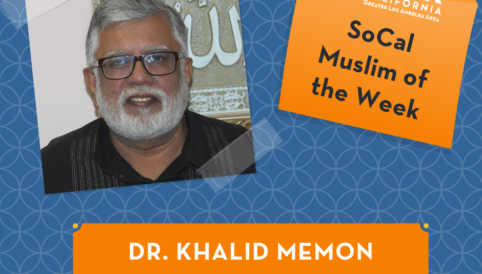 CAIR-LA is pleased to feature Dr. Khalid Memon as the SoCal Muslim of the Week.

Helping the less fortunate is the life work of Dr. Khalid Memon.
Memon is the director of the Southern California chapter of Islamic Circle of North America (ICNA) Relief in Anaheim.

He has managed the nonprofit for the past nine years. The organization oversees a domestic violence shelter, free health clinics, dental and eye clinics, family services, counseling and distribution of food, supplies and hygiene packs.

All of the organization’s services are free and available for practically anyone.

“We started by serving Muslims but we now we see a need to help other people,” said Memon, who employs a staff of three full-timers and four part-timers.

Funding for the group is generated through community donations.

Memon jumps at the chance to assist those in need. He and his wife, Dr. Rehmat Memon, dreamed of starting a domestic violence shelter in 2012 in Orange County. Not only did they accomplish their goal, but the Memons are also close to opening another safe house in San Diego. They also are opening a counseling center in Corona soon.

“Because I see there are a lot of Muslim sisters that are victims in these cases and people are not always educated that Muslims have (domestic violence) cases, too,” he said. “We have to take care of them.”

Memon worked for years as a pulmonary physician in Pakistan before he and his family immigrated to San Francisco in 1989. After a year, the family moved to Orange County.

Memon managed his own business and worked as a manager at the Al-Shifa Clinic in San Bernardino, but he always believed running a nonprofit was in his future.

Personal: Memon, who enjoys gardening and cooking in his spare time, and his wife live in Orange. They have two kids and two grandkids.

Quotable: “Helping people is what my religion teaches, and I strictly follow those teachings.”