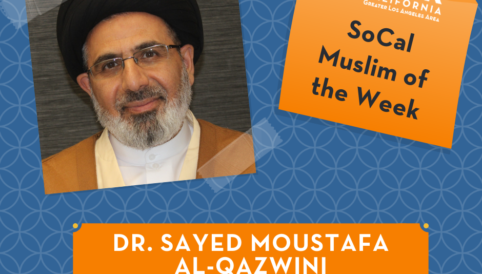 CAIR-LA Is pleased to feature Dr. Sayed Moustafa al-Qazwini as the #SoCalMuslimoftheWeek

His family history goes back 42 generations as direct descendants of the Prophet Muhammad (peace be upon him). Dr. Sayed Moustafa al-Qazwini and his family have no need for genealogy, tracing their roots instead the old-fashioned way.

“Before DNA was discovered, we had a family tree that we passed down from one generation to the next one. I have the family tree in my house,” al-Qazwini said.

Al-Qazwini is founding imam of the Islamic Education Center of Orange County and president of the Shia Muslim Council of Southern California. He also is author of several books, “Discovering Islam,” “Inquiries About Shi’a Islam” and “Invitation to Islam” among them.

Al-Qazwini came to the U.S. in the 1994, following in the footsteps of his father, whose persecution by Saddam Hussein eventually led to him and his family fleeing Iraq and relocating to Kuwait before moving to the States in 1986.

“He was supposed to be here only for one week, but the people insisted for him to stay, particularly the Shia Muslim community,” al-Qazwini recently recalled about his father’s initial visit. “They needed a religious leader.”

Al-Qazwini was assigned to oversee the family’s work in San Diego, where no Shia mosque existed. He established the first one in the city.

In 1996, he moved to Orange County, where he established the IECOC and built the center into a popular gathering spot for educational, religious and social activities.

Personal: al-Qazwini and his wife live in Rowland Heights. They have five children and four grandchildren.

Quotable: “Islam for me is the food that I eat, the air that I breath, my future, my present, my past, my entertainment, my life, my struggle. It’s everything. Islam represents everything to me.”