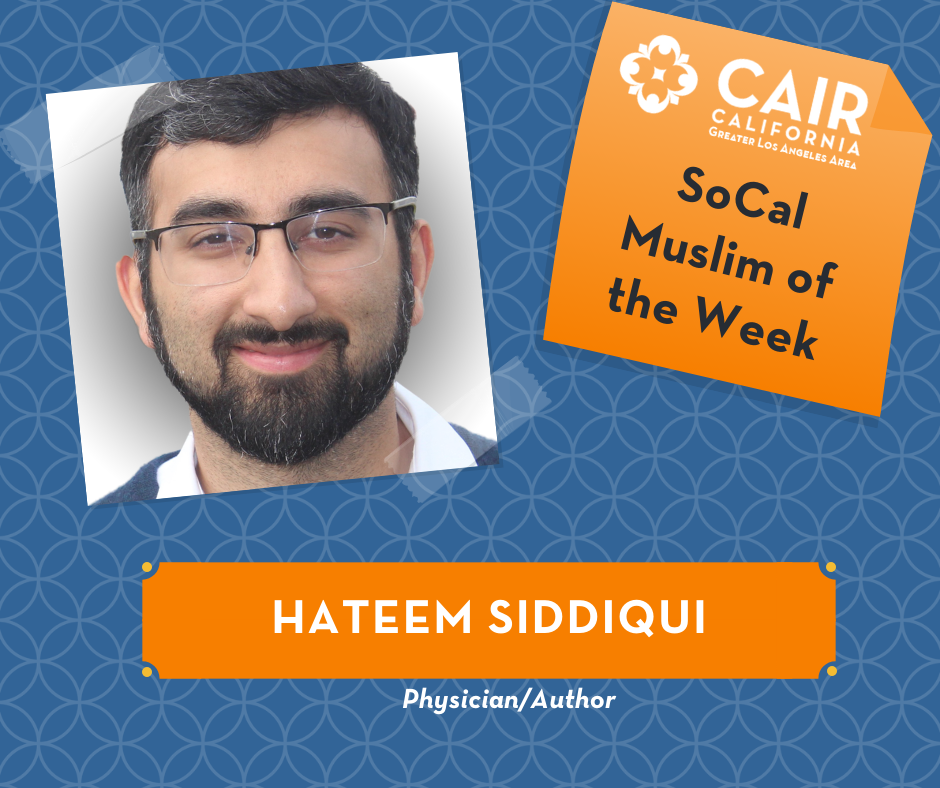 CAIR-LA is pleased to feature Hateem Siddiqui as the SoCal Muslim of the Week.

He spent years in school to become a physician, but along the way, Hateem Siddiqui discovered he had a gift for writing.

“I always had an affinity for writing,” Siddiqui says.
Siddiqui is the author of “The Art of Studying: An Islamic
Approach to Academic Success.” Released in February, the book serves as a guide for Muslim students seeking to improve study habits through an Islamic approach, helping to balance their spiritual lives with their academic pursuits.

“Trying to find that balance was something I struggled with,” Siddiqui says. “Once I kind of struck a balance between those two, I wanted to bring it to everyone else’s attention that you can do both.”

As a physician, Siddiqui, 32, examines patients at hospitals in Upland and Apple Valley as a part of Caremore medical group. Although he works long hours, his schedule sometimes helps him avoid a stretch of grueling weeks and months many physicians face. That allows Siddiqui time to write and to spend quality time with family.

A Southern California native, Siddiqui received his bachelor’s degree in biological sciences from UC Riverside. He finished medical school at American University of the Caribbean and completed his internal medicine residency at Maricopa Medical Center in Phoenix, where he received several awards.

At UC Riverside and AUC, Siddiqui served as president of the Muslim Students Association.

Personal: Siddiqui and his wife, Saima, reside in Rancho Cucamonga with their 4-year-old daughter.

Quotable: “In college, you kind of figure out your identity and what’s important to you. So, at that time, I met people who influenced me a lot and enabled me to recognize my faith as something valuable and that it wasn’t just faith but a way of living and how I could contribute to humanity using that.”