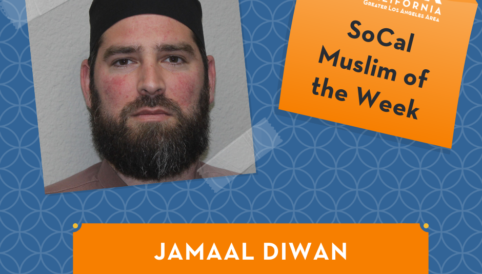 “I had this roommate that kept trying to convert me to underground hip-hop,” Diwan said, referring to his undergrad days at UC San Diego. “He kept saying ‘you’re listening to all of this (music), so check this out.’ Finally, when I started listening to it, I got into that whole scene. There’s a lot of Islam in underground hip-hop.”

Diwan declared the Shahada when he was 19. He joined the Muslim Students Association a short time later and met the woman who would become his wife, Muslema Purmul.

Fast-forward to this past February, when Diwan and Muslema opened The Majlis, a Muslim center in Orange, where Muslims can study Islam, listen to public speakers and lectures and attend events and programs based on traditional sources of understanding the faith.

The couple also co-founded the Safa Center for Research and Education, an online platform that explores issues related to Islam and Muslims.

Diwan is author of “A Brief Introduction to Islam,” a quick read on the basic teachings of Islam.

Personal: Diwan earned his bachelor’s degree in Third World studies from UCSD and has a law degree in Sharia from al-Azhar University in Cairo. He and Muslema live in Irvine with their two children.

Last book read: “We Need to Talk: How to Have Conversations That Matter” by Celeste Headlee

Quotable: “The extent of my knowledge of Islam (in college) was that the Muslims fast during Ramadan. Half of that probably came from my parents and half of it from rap music.”