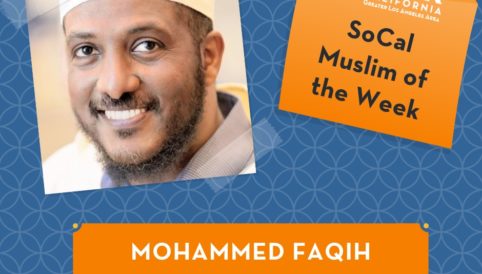 CAIR-LA is pleased to feature Mohammed Faqih as the SoCal Muslim of the Week.

Mohammed Faqih believed his future was in the field of medicine.

“It wasn’t like a dream to me, but it was more like a calling,” Faqih said. “I felt like I needed to help people, save lives.”

He now assists in a different manner.

Faqih is Imam of the Islamic Institute of Orange County (IIOC) in Anaheim, where he has served for the past 13 years. Imam Faqih took a circuitous route of getting there, but the journey made him a better man.

In 2003, he moved to California, where he became Imam of the Islamic Center of San Diego. But Imam Faqih relocated to the Columbus, Ohio area to oversee the family’s grocery business. A short time later he sold it, realizing his calling was in teaching, preaching and activism.

“When I considered coming back to California, I had multiple opportunities,” Imam Faqih said. “In this mosque, there was a need, so they asked me to visit in the month of Ramadan 2005. I fell in love with the community.” And judging by his growing popularity, the local Muslim community fell in love with Imam Faqih too.

He officially became Imam at the IIOC in 2006.

A native of Ethiopia who grew up in Saudi Arabia, Imam Faqih followed his brothers to the U.S. in 1991 after finishing high school.

He earned a bachelor’s in Islamic studies from the Institute of Islamic and Arabic Studies in America in Fairfax, Va., and graduated in Quran Memorization and Recitation at Jeddah, Saudi Arabia. He also served as Imam at the Islamic Community Center in Laurel, Md., and as an assistant Imam at the Islamic Association of Raleigh, N.C.

Personal: Imam Faqih and his wife live in Yorba Linda with their three children.

Quotable: “Islam means everything to me. My life revolves around it. Everything I do is connected to it. It’s in everything that I do.”