Despite its Rebrand, This Department of Homeland Security Grant Program Can Still Be Used to Target Muslims 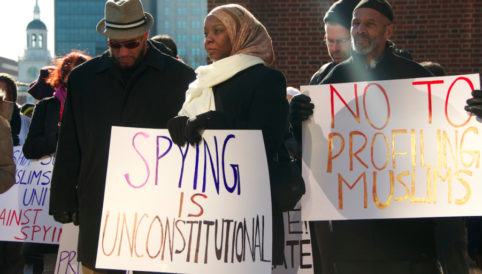 In 2011, as part of its counterterrorism strategy, the Obama administration initiated the Countering Violent Extremism (CVE) program under the Department of Homeland Security (DHS). This program provided funding to organizations, police departments, schools, and colleges to train members in identifying American Muslims who they believe may commit acts of terrorism. However, these indicators were based on prejudiced perceptions of Muslims and included frequent mosque attendance as a possible sign of “radicalization.”

In 2019, CVE was renamed as Targeted Violence and Terrorism Prevention (TVTP) then, in 2021, it was renamed as the Center for Prevention Programs and Partnerships (CP3). Grants given under the CP3 rebrand are still referred to as TVTP.

Despite claims that CP3 will not be used to target Muslims in the same way that CVE did, the program is still deeply flawed for two main reasons:

Therefore, while CP3 has a new name, it does nothing to address and fix the core issues of the CVE framework and expands speculative surveillance. Because of these fatal flaws, CAIR-LA calls on organizations and individuals eligible to receive funding to not apply for the 2022 TVTP Grant.