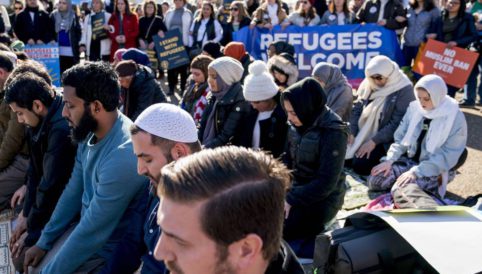 In light of the upcoming Supreme Court decision on the constitutionality of the Muslim Ban, the following op ed was published in The Sacramento Bee to educate people on the detrimental effects of these policies.

The Trump administration’s first Muslim ban was issued in January 2017. All three versions conveyed the same message: Muslims are not welcome in the United States. And all three are unconstitutional.

On Monday, more than 800 people attended the seventh annual Muslim Day at the state Capitol to advocate for civil rights, including protections for religious communities and immigrants. On Wednesday, the U.S. Supreme Court is scheduled to hear arguments about the legality of President Donald Trump’s Muslim ban. It is expected to make a decision by June, and the whole world is watching to see whether the justices will uphold American ideals of religious freedom.

Lower courts across the country have repeatedly thwarted the president’s attempts at this unconstitutional ban. The Ninth U.S. Circuit Court of Appeals ruled that the ban violates the Immigration and Nationality Act, which does not allow the president to categorically ban entire nationalities. In February, the Fourth Circuit Court of Appeals ruled that the purpose of the bans has always been to “exclude Muslims from the United States.”

The ban doesn’t just affect the lives of immigrants, but also strips U.S. citizens of constitutional rights. As an immigrants’ rights lawyer serving Muslim Californians, I have seen the tragic impact on families and children of all backgrounds.

Earlier this year, I received a call from a couple stranded in Italy, uncertain of whether they could return home to the U.S. because the husband’s visa application was denied. The wife was forced to decide between staying with her husband or returning home without him.

Another U.S. citizen petitioned for his Iranian parents so they could live with him. Because of the ban, he cannot care for his 67-year-old father, who suffers from 80 percent blindness and needs continuous care. A professor, who is a green card holder and lives with his wife and U.S. citizen children, was diagnosed with an aggressive form of leukemia and has little chance of survival without a bone marrow transplant from a close family member. Efforts to get a visitor visa for one of his Yemeni sisters were denied, citing the ban as a basis. Desperate, the family reached out to our legal team seeking guidance on how to bring his remaining siblings to the U.S.

These are just a few examples of the many Americans and green card holders who are directly and negatively impacted by this discriminatory ban. Their lives have not only been put on hold; some have been put at risk, and their family unity and financial security have been threatened.

All three iterations of the Muslim ban are rooted in religious animus and have a chilling effect on the reputation and future of our country. By ruling against the ban, the Supreme Court will ensure that we uphold core values that draw on the strength of our diversity and safeguard our constitutional rights.

Farida Chehata is the immigrants’ rights managing attorney for the Los Angeles office of the Council on American-Islamic Relations. She can be contacted at fchehata@cair.com