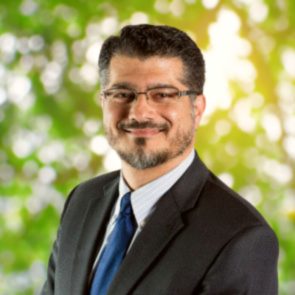 Hussam Ayloush has been lifelong human rights and democracy activist for causes here and abroad. He took his current position as Executive Director of the Greater Los Angeles Area office of the Council on American-Islamic Relations (CAIR-LA) in 1998.

Hussam is a member of the West Coast Muslim-Catholic Dialogue and the Abrahamic Faith Peacemaking Initiative. He has been an elected delegate and Executive Board member for the CA Democratic Party for nearly 10 years. He serves on the Advisory Board of the Orange County chapter of Asian Americans Advancing Justice (AAAJ).

He is one of the founders of the CAIR-CA PAC, which aims to support political candidates who stand for civil rights and encourage Muslim Americans to run for office.

He is the past National Chairman of the Syrian American Council (SAC), an organization that advocates for democracy and human rights in Syria. In 2016, Hussam was chosen by the Orange County Register as one of the “100 Most Influential” individuals in Orange County.

In 2017, Hussam joined more than 20 plaintiffs in a federal lawsuit filed in Virginia by the national Muslim civil rights group challenging President Trump’s Muslim Ban on the grounds it violates the First and Fifth Amendments of the constitution.

In 2018, he was one of the first of the 32 inter-faith leaders arrested at the U.S.-Mexico border as more than 300 people, leaders of churches, mosques, synagogues, and indigenous communities, took part in a demonstration of civil disobedience.

Hussam holds a B.S. degree in Aerospace Engineering from the University of Texas, Austin, and an M.B.A. degree from California State University, Fullerton. He is married and has 5 children and two grandchildren.