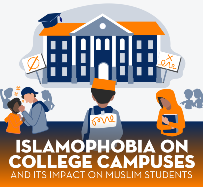 The California chapter of the Council on American-Islamic Relations (CAIR-CA) announced the publication of a new report indicating that nearly 40% of Muslims attending college in California reported facing harassment or discrimination.

The report – titled “Campus Climate Report 2019-2020: Islamophobia on College Campuses and its Impact on Muslim Students” – is based on findings from a statewide survey of approximately 570 Muslim students at more than 60 institutions of higher learning primarily throughout the state of California, including both public and private universities and colleges. The report examines these responses and aims to understand the extent to which Islamophobia, the closed-minded prejudice against or hatred of Islam and Muslims, manifests itself into the campus environment.

To read the report, visit: bit.ly/cairca-campus-climate-2020

The report reveals that nearly 40% of the Muslim students surveyed experienced harassment or discrimination based on their religious identity by peers, campus administrators, and/or campus personnel.

Furthermore, nearly 30% of Muslim students surveyed reported harassment or discrimination due to their advocacy on issues related to their Muslim identity. The survey results highlight that Muslim students who engaged in political advocacy on behalf of Palestinian issues were subjected to egregious and persistent forms of harassment and discrimination. Muslim students also reported high levels of discomfort in various campus settings and limitations to their ability to express themselves on issues related to their religious identity.