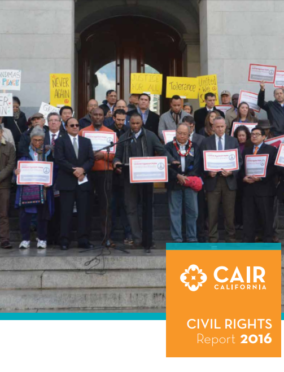 Caught up in the Islamophobic hysteria following the Paris and San Bernardino attacks, and given apparent permission by the anti-Muslim rhetoric of political figures across the country, many carrying fear of and animosity toward Muslims allowed their hate to surface in 2015. They did so by lashing out against perceived Muslims and properties associated with the Islamic community.The connection between the rise in hate incidents against the American Muslim community in 2015 and divisive political rhetoric was made clear when a staunch and outspoken Donald Trump supporter was arrested in Richmond on December 20, 2015.