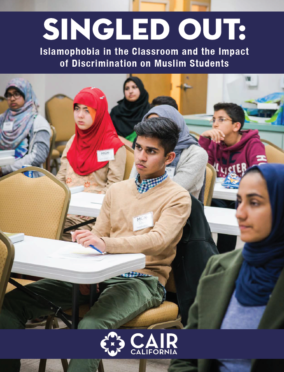 In this report, the California Chapter of the Council on American-Islamic Relations (CAIR-CA) provides an analysis and evaluation of the current public school climate for American Muslims in California. The purpose of this report is to understand the extent to which Islamophobia, defined as the closed-minded prejudice against or hatred of Islam and Muslims, manifests itself in the school environment in the form of bullying and discrimination. As such, this report focuses on anti Muslim bullying: the unwanted, aggressive behavior among school-age children or perpetrated by educators and administrators that involves a real or perceived power imbalance based on the student’s Islamic faith.
As the Trump administration continues to promote Islamophobic rhetoric and policies in the mainstream, many students, parents, and educators fear the negative impact the normalization of Islamophobia could have on Muslim students and the Muslim population in the United States as a whole. In the face of this challenge, CAIR-CA has continued to advocate zealously to best protect civil rights and empower American Muslims. This report shows the impact of CAIR-CA’s advocacy over the past seven years. CAIR-CA’s continued legislative efforts and direct legal services combating anti Muslim bullying are specifically outlined in this report.

Specifically, key findings of the survey illustrate minimal improvement in school environments for Muslim students: only 70% of respondents reported feeling welcome and respected in school, compared to 69% in 2016. Additionally, only 72% of Muslim students reported feeling comfortable letting others know that they are Muslim, which decreased 5 percentage points from the 2016 survey in which 77% reported the same. One factor leading to discomfort among Muslim students was their peers’ negative activity online. Specifically, 35% of the 2018-2019 survey respondents reported that their peers make offensive statements and posts about Islam and Muslims online.

Despite experiencing bullying based on their religious identity at a lower rate than previous years, Muslim students continued to report higher rates of discrimination and bullying compared to other students. In the 2018-2019 survey, 40% of respondents reported that students at school were bullied for being Muslim. This is double the national statistic for students being bullied at school.1 The 2018-2019 survey also found an increase in discrimination against those who are more visibly Muslim. Another key finding was an increase in students witnessing other students getting bullied for being Muslim. In 2018-2019, the rate was 39%, which was up 20 percentage points from 2016, during which only 19% reported the same.

In addition to showing a decrease in peer-to-peer bullying, the survey results showed a decline in offensive comments from teachers, administrators, and other officials from 38% in 2016 to 29% in 2018-2019. Furthermore, survey respondents reported a decrease in Muslim students being targets of cyberbullying. Cyberbullying involves posting or sending electronic messages, including text, pictures, or videos, aimed at harassing, threatening, or targeting another person through a variety of media and social media platforms. In the 2018-2019 survey, 13% of respondents reported being victims of cyberbullying, down from 26% in the 2016 survey.

CAIR-CA also considered gender-based differences in survey responses. More female students reported experiencing bullying, with 44% of female respondents reporting being bullied compared to 37% of male respondents. In addition to analyzing gender-based differences, CAIR-CA also focused on age-based differences. The data revealed that high school-age student respondents were bullied at a higher rate than lower grades, with a shocking 48% of 12th-grade respondents reporting being bullied, the highest rate based on age/grade.
The findings of this report show that while there has been a decrease in anti-Muslim bullying in public schools, the need to continue monitoring anti-Muslim bullying is still crucial until all forms of bullying are eradicated.