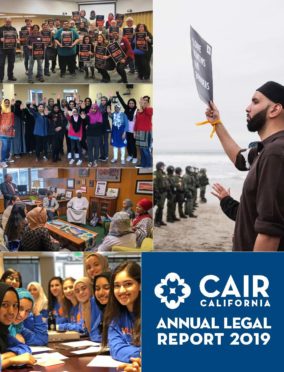 In response, the CAIR-CA legal staff work to assist the American Muslim community, as first responders against institutionalized and individual forms of Islamophobia. In 2018, our offices conducted 2,191 legal intakes with impacted individuals, in addition to providing grassroots organizing, advocacy, and direct legal services to redress violations of civil rights. With the reinforcement of more legal staff and the addition of new immigration legal services to the San Francisco Bay Area and the Sacramento Valley offices, CAIR-CA now provides robust immigration services on matters such as naturalization, adjustment of status, and asylum, across much of the state. CAIR-CA’s offices also filed several lawsuits in 2018 to counter the deleterious effects of anti-Muslim bigotry.

Anti-Muslim bias incidents in California continued to be of significant concern with the targeting of American Muslim children, families, and institutions. Despite the problem of underreported hate crimes and incidents, CAIR-CA recorded 113 such incidents. Given the proliferation of anti-immigrant policies, including the Muslim Ban, immigration matters reported to CAIR-CA continued steadily increasing from 1,014 in 2017 to 1,203 in 2018, a nineteen percent uptick in intakes received. This year, CAIR-CA additionally saw an increase in employment-related matters with CAIR-CA attorneys advising on 170 matters as compared to 140 in 2017, a twenty-one percent increase.

CAIR-CA is committed to advancing the civil rights of all Californians and stands in proud partnership with other civil rights organizations committed to safeguarding targeted communities. We strive to set robust legal precedents, pass democratic laws, and shape a society free of unequal treatment and discrimination.