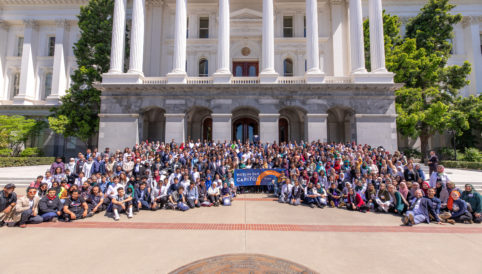 (SACRAMENTO, CA, 4/25/19) — A total of 650 Muslim community members, religious leaders, students and activists spent April 22 at the State Capitol as part of the eighth annual Muslim Day at the Capitol (MDAC), organized by the California chapter of the Council on American-Islamic Relations (CAIR-CA).
WATCH: CAIR-California Muslim Day At the Capitol Press Conference
(NOTE: Photos available upon request. Please credit the included photo to Brandon Miyasaki/Shot Archives.)
Participants from across California took part in 100 meetings with elected officials, advocating for three pieces of legislation in an effort to promote just policies within the state.
“Muslim Day at the Capitol provides an opportunity for our community to connect with California lawmakers and demonstrate its commitment to social justice and advocacy,” said CAIR-Sacramento Valley/Central California (CAIR-SV/CC) Executive Director Basim Elkarra. “To think that in eight years we’ve grown from 50 attendees to 650 is truly remarkable. The growing success of MDAC illustrates that California Muslims are strengthening their political muscle and helping influence California politics for a more inclusive, tolerant and just state for all.”
MDAC participants advocated for the following legislation:
CALIFORNIA ACT TO SAVE LIVES (AB 392)
This bill would make clear that police officers should only use deadly force when they do not have other options. It would redefine the circumstances under which a homicide by a police officer is deemed justifiable to include when it is in self-defense or the defense of another, or when it is necessary to prevent the escape of a fleeing felon whose immediate apprehension is necessary to prevent death or serious injury. It would additionally bar the use of this defense if the peace officer acted in a criminally negligent manner that caused the death, including if the officer’s criminally negligent actions created the necessity for the use of deadly force.
FREE THE VOTE ACT (ACA 6)
This amendment to the California Constitution would restore voting rights to people on parole in California. Felony disenfranchisement in the California Constitution can be traced directly to a history of racially discriminatory laws. With mass incarceration at an all-time high, the voter suppression impact of felony disenfranchisement has intensified. Right now, around 50,000 Californians are not able to participate in local, state, and federal elections because they are on parole. This bill will restore those rights by placing an initiative on the ballot to amend the California Constitution and updating related provision in the state Elections Code.
PUPIL INSTRUCTION: HIGH SCHOOL GRADUATION REQUIREMENTS (AB 331)
This bill would add the completion of a one-semester course in ethnic studies, in either the subject of social studies or English to the high school graduation requirements. The Instructional Quality Commission would develop the course curriculum with input from ethnic studies professors at universities and colleges, along with representation from local education agencies and educators with experience in studying and teaching ethnic studies.
CAIR-CA hosted a press conference featuring Assembly members Shirley Weber, Kevin McCarty and Jose Medina, who each authored at least one of the bills. CAIR-SV/CC’s Elkarra also spoke. MDAC attendees also heard from renowned national activist Linda Sarsour.
CAIR is America’s largest Muslim civil liberties and advocacy organization. Its mission is to protect civil liberties, empower American Muslims, and build coalitions that promote justice and mutual understanding.
La misión de CAIR es proteger las libertades civiles, capacitar a los musulmanes estadounidenses, y construir coaliciones que promuevan la justicia y la comprensión mutua.
END
CONTACT: CAIR-SV Communications Manager Kalin Kipling-Mojaddedi, 916-441-6269, kkipling@cair.com; CAIR-SD Executive Director Dustin Craun, 303-667-4027, dcraun@cair.com; CAIR-LA Communications Manager Eugene W. Fields, 714-851-4851, efields@cair.com; CAIR-SFBA Executive Director Zahra Billoo, 626-252-0885, zbilloo@cair.com