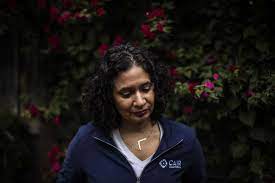 Attorney Layli Shirani represents an Afghan couple, a judge and her prosecutor husband, who hope to settle in California.

Carrying a few meager belongings and using assigned code names, the judge and her family slipped into the crowded bus terminal in Kabul, where they would attempt their escape from Afghanistan.

It was a crisp October morning and four chartered buses, hidden in plain sight inside the city’s long- distance transportation hub, were quickly filling up. After weeks spent changing safe houses by night to evade Taliban patrols, the judge, her husband, their two children and the husband’s mother were now part of a daring rescue mission happening in broad daylight.

This mission wasn’t devised by a foreign government or an intelligence agency, but by the International Bar Association’s Human Rights Institute. Along with other nongovernmental organizations, the dues- paying professional association has attempted to fill a vacuum left since August, when U.S. forces pulled stakes from a 20-year campaign that ended with the Taliban reclaiming control of Afghanistan.

The withdrawal left thousands of stranded Afghans behind. It also left the judge and her husband, a national security prosecutor, without protection from the death threats they had been receiving working for the government. With that government in shambles, they went into hiding and sought a path to California, where the judge has an uncle in Sacramento.

“I was beginning to lose hope that we would get the opportunity to leave before something bad happened to us,” the judge told The Chronicle in a video interview translated from Farsi by attorney Layli Shirani of the Council on American-Islamic Relations. (In keeping with its policy on anonymous sources, The Chronicle is identifying the couple by their professions because of the threats to their safety.)

Now it was attempting an even larger operation, a gutsy attempt to transport 77 families — 367 people total — through nearly 300 miles of snow-laden roads and various Taliban checkpoints, to a city where flights out of the country were possible.

As the convoy carrying prominent Afghan women rumbled north on the morning of Oct. 21, the judge rocked her crying infant son and prayed that they would make it.

By the time the final U.S. military plane departed Kabul on Aug. 30, American and coalition forces had airlifted 124,000 civilians out of the country during a frenzied 18-day period.

The judge and prosecutor were among the tens of thousands still asking for a way out.

Like many Afghan civil servants, the couple never worked directly for the U.S. government, so they didn’t qualify for special visas. Yet their work, which included prosecuting and sentencing Taliban fighters, put them at risk now that some of those men roamed free.

The danger to female legal professionals is particularly grave, said Emily Foale, a program coordinator with the Human Rights Institute.

“Having a profession which puts you in judgment of men … puts you at extreme risk,” Foale said. “I’ve seen videos of the Taliban outside women’s houses looking for where they are.”

After setting up the Afghan Independent Bar Association a decade ago, the International Bar Association had deep connections on the ground. Foale said the association’s Human Rights Institute tried various strategies to get female judges and lawyers out, including applying for visas on their behalf to different countries. But nothing worked.

“Really, it felt hopeless,” she said.

Then the institute discovered another possible exit strategy. Some private charter plane companies were still willing to fly threatened Afghans out of the country.

“(It) was incredibly brave,” Foale said.

But the flights would be costly — about $1.6 million —and depart from Mazar-i-Sharif, a city 265 miles north of Kabul.

The London-based association began intensive fundraising efforts as it arranged to rent buses in Kabul and hotel rooms in Mazar-i-Sharif. Not least of all, Foale’s group needed to find a country willing to accept hundreds of Afghan evacuees.

A breakthrough came when a former female judge, Greece President Katerina Sakellaropoulou, said her country would take them in.

Now it was just a matter of getting nearly 400 people there.

‘We are all patriots’

The buses reached Mazar-i-Sharif following a 10-hour journey. That night, the judge hid behind a door as she watched Taliban soldiers, rifles drawn, haul men out of a building across the street.

Two days later, the family made it to the airport, where the husband’s name pinged during a passport check. An airport worker told him the database showed he was a government prosecutor. For a terrifying moment, the judge and prosecutor feared the worst. Then the worker offered to delete the record and advised the prosecutor to tell the next two checkpoint guards — both members of the Taliban — that he was unemployed.

Finally on the plane, the prosecutor said he didn’t feel relief so much as an intense heaviness.

“We are all patriots who loved our country,” he told The Chronicle. “I had a normal life there and, in any other circumstance, I would have never chosen to leave.”

After an unexpected detour to the Eastern European country of Georgia, the family landed in Athens on Oct. 24.

In California, Shirani was elated. Yet the attorney worried about her clients’ prospects of being granted entry to the U.S. on the humanitarian parole applications she was preparing. Only 100 of the 28,000 such applications submitted by or on behalf of Afghans from July to mid-November have been approved, according to a U.S. Citizenship and Immigration Services spokesperson.

That amounts to less than half a percent.

For the past several weeks, the family of five have spent their days in Athens navigating local supermarkets and sharing a sparse hostel room. While the judge and prosecutor appreciate the welcome Greece has provided, they know it is a country with many migrants and little infrastructure to resettle them.

“Our future is uncertain,” the judge said. “We hope to end up in a situation where we can plan for our children’s educations and futures, and even have the possibility of finding meaningful work for ourselves.”

She and her family have less than a month left on their 60-day visa to find their next home. The clock is ticking.