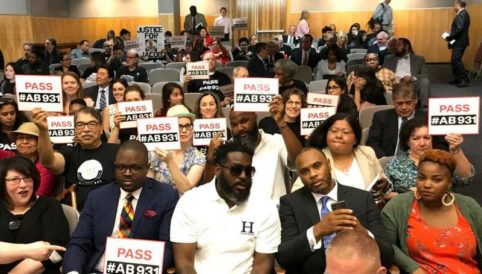 (SACRAMENTO, CA, 8/30/18) – The California chapter of the Council on American-Islamic Relations (CAIR-CA) today expressed its disappointment with the tabling of a crucial police use-of-force bill but applauded the passage of two other key bills involving bullying and business licenses for immigrants.

Assembly Bill 931, the Police Accountability & Community Protection Act, introduced by Assembly members Shirley Weber and Kevin McCarty and a priority CAIR-CA bill, would have authorized police officers to use deadly force only when necessary to prevent imminent and serious bodily injury or death.

READ: AB-931 Criminal procedure: Use of force by peace officers

AB 931 was prompted by the fatal police shooting of Stephon Clark in Sacramento in March.

The bill was tabled by the Legislature on Wednesday night.

“We are disappointed that the state Legislature did not step up to save lives and take steps to improve the relationship between law enforcement and the community,” said CAIR-CA Legislative & Government Affairs Coordinator Yannina Casillas. “We are committed to change the use-of-force policy that has led to so many unnecessary deaths.”

CAIR-CA’s statewide report on school bullying found that 53 percent of 1,041 Muslim students in California surveyed were bullied over their religion in 2016.

READ: Unshakable: The Bullying of Muslim Students and the Unwavering Movement to Eradicate It

“It is more important now than ever to address bullying that focuses on long term impact,” Casillas said.  “The toll that Islamophobia takes on the mental health of American Muslims is significant and even more substantial for students, who are expected to bear the burden of defending against Islamophobic stereotypes while coping with possible mental distress resulting from bullying.

“AB 2291 is a step forward in advocating for learning environments free from hostility and discrimination.”

“We are thrilled California has stepped up to provide immigrants with economic opportunities to thrive,” said Casillas.

All three bills were highlighted during CAIR-CA’s Muslim Day at the Capitol, which was held on April 23.