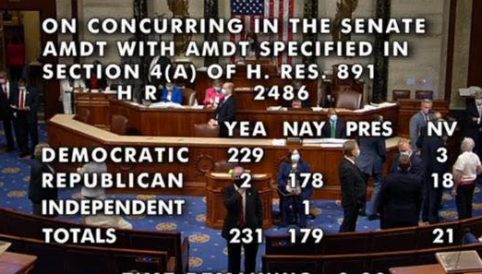 (SACRAMENTO, CA, 7/22/20) – The Sacramento Valley/Central California office of the Council on American-Islamic Relations (CAIR-SV/CC) today applauded the U.S. House of Representatives for today’s vote to pass the NO BAN Act (H.R. 2486, formerly H.R. 2214) and urged U.S. Senate Republican leadership to support the bill.

“We are thrilled that a majority of the House voted to overturn the Trump administration’s cruel and discriminatory Muslim and African bans. We are so grateful to those who voted ‘Yes.’ Families have been torn apart for too long due to Trump’s xenophobic and bigoted policies, and this is a crucial step toward justice for these families. Our work to repeal the bans is far from over, and we will continue to push to overturn unjust policies that target vulnerable and marginalized communities.”

In a statement, CAIR National Government Affairs Director Robert McCaw thanked supporters of the House bill and called on the U.S. Senate to take up the legislation:

“CAIR applauds members of the U.S. House of Representatives who today stood shoulder-to-shoulder with the American Muslim community by voting to support the NO BAN Act, which strikes the first major legislative blow against Trump’s Islamophobic and xenophobic Muslim and African travel bans.”

“We especially thank our congressional allies who supported the NO BAN Act from its inception, including the act’s primary sponsor, Congresswoman Judy Chu. Although we welcome today’s vote, our work to overturn this and other discriminatory and bigoted policies of this presidency is far from over.

“The only thing now standing in the way of Congress adopting the NO BAN Act is the willingness of U.S. Senate Republican leadership to show some moral backbone and fight back against Trump’s discriminatory, hateful, and un-American Muslim and African bans.

“If Senate Republicans do not support the NO BAN Act, they can count on history remembering them for standing with a bigoted policy instead of the Constitution.”

The NO BAN Act vote was previously scheduled for March on the House floor, but the vote was delayed as Congress recessed due to outbreak of COVID-19 in the U.S.

Prior to the act being rescheduled, CAIR joined fellow members of the No Muslim Ban Ever Coalition on Capitol Hill in a congressional action calling for a vote on the No Ban Act.

For Burma, Eritrea, Kyrgyzstan and Nigeria, the restrictions will apply to immigrant visas — for those seeking to live or work in the U.S. permanently. For Sudan and Tanzania, the restrictions are being placed on diversity visas. Iran, Syria, Libya, Venezuela, North Korea, Yemen, and Somalia were already subject to the travel ban, and remain so.

Since its introduction, the NO BAN Act has gone through several changes. The act itself has been merged with Washington Representative Pramila Jayapal’s Access to Counsel Act of 2020 – an act that would guarantee CBP and ICE provide persons detained for more than an hour in secondary screening access to their private legal counsel, including non-citizens and unaccompanied children, who may be detained at the U.S. border or ports-of-entry for long periods of time.

Congressional leaders also amended the act to address COVID-19 by reiterating presidential authority can be invocated to prevent the spread of “communicable disease” as defined by regulation. CAIR and many other civil rights organizations disagree with those changes given the long history and stigma of immigrants be wrongly labeled as health risks which result in discriminatory policies. The Trump administration has repeatedly invoked Section 212(f) of the Immigration and Nationality Act for COVID-19 related visa bans.

On January 28, CAIR and other organizations took part in a court hearing and rally in Richmond Va., challenging the Trump administration’s Muslim Ban based on its discriminatory intent.

In September 2019, CAIR submitted a written statement endorsing the NO BAN Act to a joint congressional oversight hearing on the Trump administration’s Muslim Ban by U.S. House Judiciary’s Subcommittee on Immigration and Citizenship and Committee on Foreign Affairs’ Subcommittee on Oversight and Investigations.