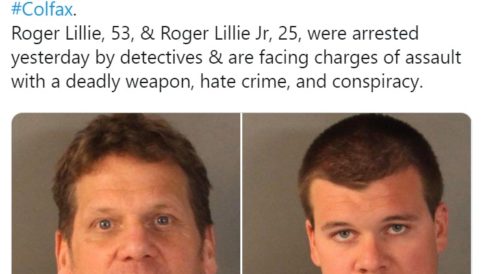 (SACRAMENTO, CA, 03/2/2020) – The Sacramento Valley office of the Council on American-Islamic Relations (CAIR-SV) today condemned a reported racist assault on a tree trimmer in Colfax and welcomed hate crime charges against two suspects.
READ: Father, son face hate crime charges for alleged racist assault in Colfax, sheriff says (Sac Bee)
In a post Sunday on Facebook that included video of the incident, the Placer County Sheriff’s Office described Saturday’s attack as “racially motivated,” saying two white males driving a silver pickup pulled in front of a tree-trimming crew on Canyon Way in Colfax. The men got out of the truck, approached the foreman and started berating him. One of the suspects grabbed the victim, holding the victim’s face against the tree-trimming trailer, while the second suspect hit the back of the victim’s head with a pole saw.
On Monday, the Sheriff’s Office announced the Sunday arrest of two suspects: Roger Lillie, 53, and Roger Lillie Jr., 25, who were booked into Auburn Jail and face charges of assault with a deadly weapon, hate crime and conspiracy.
Authorities thanked community members for their help in identifying the suspects.
In a statement, CAIR-Sacramento Valley (CAIR-SV) Executive Director Basim Elkarra said:
“We condemn this racist attack. Amid reports of a rise in hate crime violence, it is more important than ever to stand up to racism whenever and wherever we see it. The fact that this assault comes less than a month after racist vandalism was found on a coach’s vehicle at Colfax High underscores the importance of making ethnic studies a requirement for high school graduation and uplifting marginalized voices. We applaud the community for helping to identify the suspects and we welcome the hate crime charges.”
READ: CAIR-Sacramento Valley Condemns Racist Vandalism Found On Coach’s Vehicle In Colfax
READ: Hate-Crime Violence Hits 16-Year High, F.B.I. Reports (N.Y. Times)
Elkarra urged community members to report any bias incidents to law enforcement and to CAIR-SV/CC’s Civil Rights Department at 916-441-6269 or by filing a report online.
CAIR-SV is an office of CAIR, America’s largest Muslim civil liberties and advocacy organization. Its mission is to enhance understanding of Islam, protect civil rights, promote justice and empower American Muslims.
– END –
CONTACT: CAIR-SV/CC Communications Manager Kalin Kipling-Mojaddedi, 916-441-6269 or kkipling@cair.com