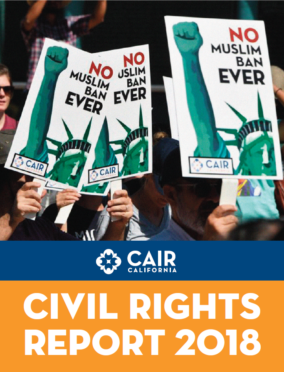 These poignant words of the nation’s first African American Supreme Court Justice serve as a stark reminder that the time is ripe for us all to redouble our efforts to prevent corrosive forces from corrupting our democracy. American Muslims are currently in the cross hairs of an administration seeking to channel, manipulate, and weaponize religious prejudice and animosity to distract from other important issues and advance its political interests.

In response, CAIR-California’s (CAIR-CA) civil rights staff works tirelessly to assist the American Muslim community as first responders against institutionalized and individual hate and animosity. In 2017, our offices conducted 2,259 legal intakes with community members,providing grassroots organizing, advocacy, and direct legal services to redress violations of civil rights. With the addition of new Immigrants’ Rights programs to the San Francisco Bay Area and the Sacramento Valley chapters, all CAIR-CA offices now provide robust immigration representation on matters including naturalization, adjustment of status, and asylum.

As expected, anti-Muslim bias incidents in California continued their upward trend in 2017 as expected with the noticeable targeting of American Muslim children, families, and institutions by state and private actors. CAIR-CA recorded an eight percent increase in anti-Muslim bias incidents in 2017 compared to 2016. Given the proliferation of anti-immigrant policies such as the Muslim Ban, immigration matters reported to CAIR-CA increased from 475 in 2016 to1,014 in 2017. Troublingly, federal government agencies, which were responsible for fulfilling many of the Trump administration’s explicitly discriminatory policies towards Muslims, were the most egregious perpetrators of anti-Muslim bias incidents. The implementation of the Muslim Bans and the renewed focus on profiling Muslims as national security threats funneled a substantial increase in government-sanctioned bigotry over the previous year. The onslaught has only strengthened and redoubled CAIR-CA’s resolve to advocate publicly and in lockstep with all Americans desirous of a future built on communal harmony, inclusiveness, and mutual understanding.

CAIR-CA is committed to advancing the civil rights of all Californians and stands in proud partnership with other civil rights organizations committed to safeguarding targeted communities. We strive to set robust legal precedents, pass democratic laws, and shape a society free of unequal treatment and discrimination because, as Justice Marshall unequivocally stated: “In recognizing the humanity of our fellow beings, we pay ourselves the highest tribute.”