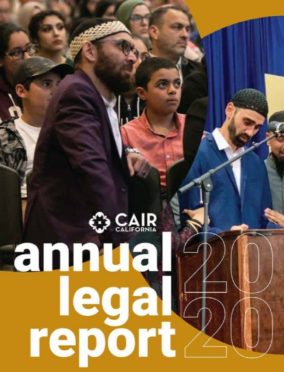 In a grim foretelling of our current political climate, the words of James Baldwin, one of the foremost voices in the Civil Rights movement, present both a challenge and a reminder of the colossal efforts needed to win constitutionally enshrined rights for all Americans.

At this moment, American Muslims number among other vulnerable communities in the crosshairs of xenophobic, racist, and white supremacist movements that are propelled by a political establishment.

The Trump administration, building on the follies and largely unchallenged biases of previous administrations, seeks to channel and weaponize anti-immigrant stereotypes coupled with anti-Muslim bigotry to maintain political hegemony by pitting groups of people against each other.

Against this backdrop, CAIR California’s (CAIR-CA) legal team has worked tirelessly on behalf of the American Muslim community to act as the first line of defense for empowering community members with the tools and knowledge to combat institutionalized bigotry.

In 2019, CAIR-CA’s legal staff conducted 2,068 legal intakes with impacted individuals, families, and community members. Our legal staff also engaged in grassroots organizing, political advocacy, and direct legal services to redress civil rights violations. We filed and won lawsuits against employers, law enforcement, and government agencies for impinging on the civil rights of Muslim Americans because of their religious beliefs and ethnicity.

CAIR-CA’s robust immigration programs, in our Greater Los Angeles Area, San Francisco Bay Area, and Sacramento Valley/Central California offices, now allow for the provision of much needed immigration services on matters including but not limited to removal defense, naturalization, adjustment of status, family reunification, and asylum.

While the number of civil rights related complaints received by our offices declined, owing to increased awareness of legal avenues and remedies, our immigration docket increased with a total of 1,305 intakes during 2019 as compared to 1,203 in 2018. The Trump administration’s slate of anti-immigrant policies, including separating children from their parents at the border, needlessly forcing people fleeing violence and persecution into dangerous refugee camps in Mexico, expedited removal of families seeking asylum and the public charge rule aimed at marginalizing working class and poor immigrants, resulted in a nine percent uptick in immigration intakes received.

Owing to the support of our community and partner organizations, CAIR-CA redoubled its efforts on ensuring that in protecting the civil rights of the most vulnerable communities, we continue to advance the rights of all communities throughout California. By leveraging the Islamic values of justice and fairness, CAIR-CA will continue to advocate and represent individuals, families, and social institutions, to build a nation filled with religious harmony, inclusivity, and mutual understanding.

Check out the flipbook version here.