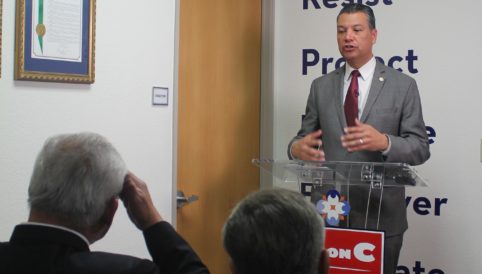 Padilla will become the first Latino to represent California in the Senate, succeeding another history-making politician, Sen. Kamala Harris, who became the first woman elected vice president of the United States.

Padilla has served as California’s secretary of state since 2015 and became one of the first statewide officials to tangle with President Trump over his unfounded allegations in 2016 that millions of California ballots had been cast illegally. According to the Los Angeles Times, Padilla’s signature achievement in his role as chief elections officer was his push for enactment of the state’s Voter’s Choice Act, allowing counties to swap out neighborhood polling places for community vote centers if they also mailed a ballot to every registered voter.

Weber has taken the lead on contentious legislative fights over police use of force, education and racial injustice. Her two-year battle to create more strict requirements for when and how police officers can use deadly force ended last year with Newsom’s signature on Assembly Bill 392 – a bill CAIR-CA advocated for. The law is hailed as creating some of the toughest standards in the nation.

“Governor Newsom’s appointment of Secretary Alex Padilla as the first Latino U.S. Senator from California is historic. Padilla’s appointment as Senator is welcomed for his record of accomplishment as a champion for just causes in California and because he can serve as an important voice for the State’s largest minority group. We look forward to seeing Secretary Padilla continue to champion issues facing vulnerable Americans on Capitol Hill.”

“The selection of Assemblywoman Shirley Weber to become the first black woman in California to hold the position of Secretary of State ensures that California’s elections continue to grow in accessibility. Dr. Weber’s history of fighting for justice means Californians will be able to continue to rest easy over the integrity of our electoral system.”

Padilla’s appointment does not require confirmation by the California Legislature, and his U.S. Senate seat will be on the ballot in the 2022 election. Weber’s appointment must be confirmed by both houses of the state Legislature.