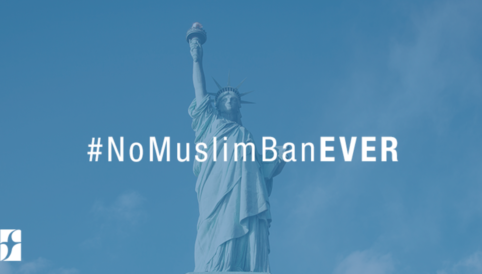 In a 5-4 decision, the Court reversed an injunction that had — until December 2017 — prevented the Trump administration from using the Muslim Ban 3.0 as a basis for denying visas to foreign nationals from eight affected countries.

In her dissent, Justice Sotomayor wrote: “A reasonable observer would conclude that the Proclamation was driven primarily by anti-Muslim animus, rather than by the Government’s asserted national-security justifications. Even before being sworn into office, then-candidate Trump stated that ‘Islam hates us.’”

“This shameful decision is reminiscent of past decisions that allowed for segregation and Japanese-American internment camps, and is part of President Trump’s larger, un-American war on immigrant families. We must continue to fight for all immigrant families by organizing, mobilizing and voting in the mid-term elections,” said CAIR-SD’s Advocacy and Policy Coordinator, Mejgan Afshan.

“This decision is a heartbreaking opinion, but it is a reminder that we need to stand firm in the face of discrimination and do so with and for our allies in the fight for the civil rights of all Americans,” said CAIR-SD’s Senior Civil Rights and Immigration Attorney, Susanne Arani.

“This is a setback; not the end of the road. Today, the Supreme Court made it clear that the responsibility will continue to be on the American Muslim community and its allies to push for an end to the Muslim Ban.

“The Muslim Ban’s bigotry should have been as clear to the Supreme Court as it is to the Muslims demonized by it. Apparently, everyone but the Supreme Court can see the decision for what it is: an expression of animosity.”

In its decision, the Supreme Court granted extreme deference to the Trump administration, which gives the administration the green light to inject discrimination back into the immigration system.

Since the Trump administration’s first attempt to ban Muslim immigration to the United States, CAIR has filed legal challenges to each of the ban’s permutations.