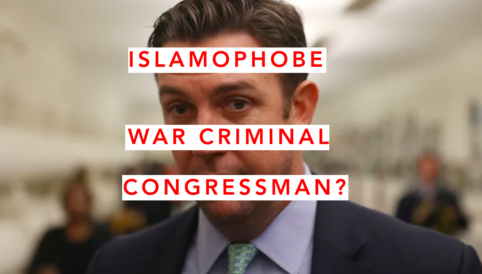 (San Diego, CA 6/3/19) – CAIR San Diego, today called on U.S. House Speaker Nancy Pelosi and members of the House of Representatives to formally investigate and censure California Congressman Duncan Hunter for publicly admitting to indiscriminately firing artillery at civilians while serving as a Marine in Iraq and posing next to dead enemy combatants in violation of the U.S. code of military conduct.

Last week Hunter admitted during a town hall in San Diego to privately taking pictures and posing next to dead combatants: “Eddie did one bad thing that I’m guilty of too — taking a picture of the body and saying something stupid… I’ve taken pictures just like that when I was overseas… a lot of us have done the exact same thing.”

According to the Defense Department’s Law of War Manual, “The respectful treatment of the dead is one of the oldest rules in the law of war. Enemy military dead must be protected from disrespectful or degrading acts.” Hunter’s claim of posing next to dead combatants like trophies would violate the U.S. military code of conduct. However, Hunter may not be prosecuted by the U.S. military because his possible crimes do not fall within the statute of limitations.

“Hunter’s shameless defense and normalization of war crimes is an insult to both the victims of war crimes and those who honorably served in our nation’s military,” said CAIR San Diego Executive Director, Dustin Craun. “Speaker Pelosi and members of the House of Representatives must thoroughly investigate Congressman Hunter’s own self-admitted war crimes and censure him if these claims are proven to be true.”

He further stated, “It’s clear Duncan Hunter does not represent the values of the people of San Diego, and the Muslim community will not stand for a war criminal and Islamophobe to continue to represent our communities in Congress.”

Hunter made the two separate confessions while defending Special Operations Chief Edward Gallagher, who is scheduled to stand trial in the coming weeks for shooting unarmed civilians and killing a wounded captive with a knife while in Iraq. According to two officials, President Trump has requested the paperwork needed to pardon several service members.

CAIR has publicly stated that such a pardon would “dishonor” both the victims of those crimes and soldiers who served honorably.

While running for re-election in 2018, Hunter promoted Islamophobic political attacks and anti-Muslim conspiracy theories targeting his Christian opponent of partial Palestinian descent was a “security risk” that had “ties to terrorism” and was “trying to infiltrate the U.S. government.”