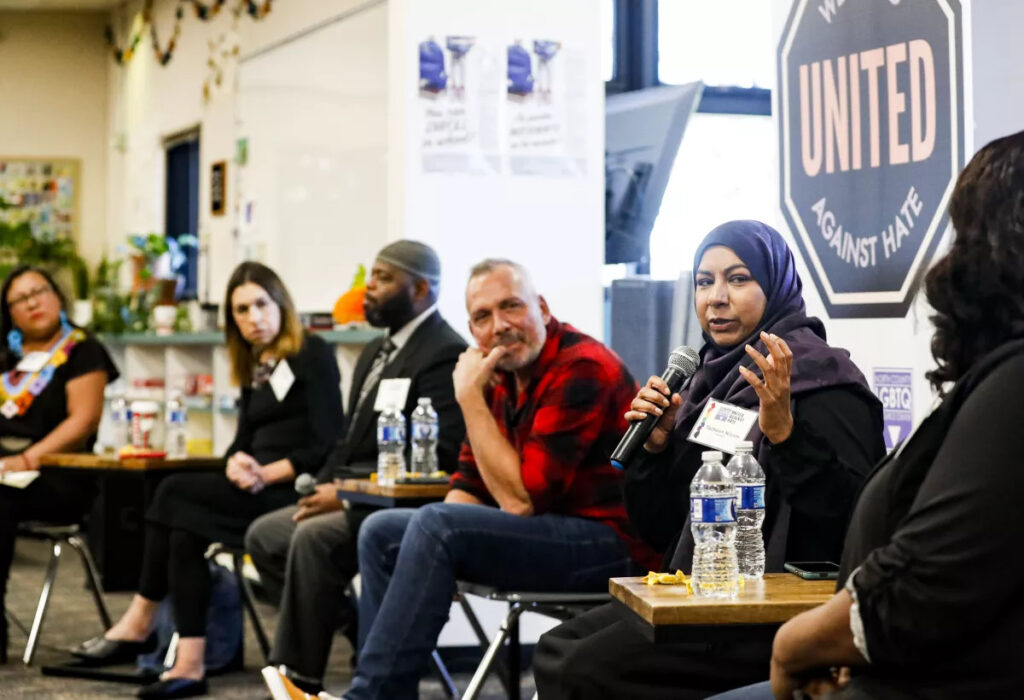 Hosted by the North County LGBTQ Resource Center at Guajome Park Academy, the Stop the Hate community panel included speakers from a consortium of community groups and organizations, as well as an FBI special agent.

Panel members noted that hate crimes across the country have climbed in recent years, reaching an all-time high of 7,759 incidents in 2020, the FBI reported in September 2021. According to the Department of Justice, the most common motivations for hate crimes is race or ethnicity, followed by religion and sexual orientation.

Panelists attributed some of the rise to improvements that have made it easier to report hate crimes. Prejudiced comments made by former President Donald Trump and anti-Asian sentiments that increased during the pandemic are also to blame, they said.

The Stop the Hate panel took place in honor of United Against Hate week, a statewide effort founded by 13 Bay Area cities in 2018 as a response to White supremacy rallies held there the previous year. The effort has now grown to include more than 200 communities throughout California, with this year’s United Against Hate week held from Nov. 13-19.

Despite an increase in hate crimes, incidents still tend to be under-reported to law enforcement, experts say.

Saturday’s panelists said that people from marginalized communities may choose not to report an incident because they don’t trust police or other law enforcement agencies. Other victims may not believe the benefits of reporting outweigh how they could be negatively impacted, such as a fear from undocumented people of being deported.

Most of the victims emigrated back to Mexico before the case was resolved, which, Nunez-Alvarez said, exemplifies the kinds of detrimental impacts reporting hate crimes can have on the immigrant community.

“It’s a very insidious kind of system that just hasn’t worked for us,” the Universidad Popular co-founder/co-director said.

Although reporting hate crimes has gotten easier in recent years, there is still confusion about the kinds of incidents that should be reported and to whom, panelists said.

Until recently, hate incidents that didn’t rise the level of a hate crime weren’t tracked, said Tazheen Nizam, Council on American-Islamic Relations California executive director. Due to advocacy from the community, the San Diego County District Attorney created a virtual space where such crimes and incidents may now be reported.

“These things were not even noticed, or noted or codified somewhere,” Nizam said. “Because now we’re able to gather this data, we’re able to show the multiple times the same individual is able to show up everywhere and create these nuisances.”

During the panel, two women from the audience stood up to address the fact that there were no Asian American, Pacific Islanders and/or Hindu speakers during the event.

“We are not considered a marginalized community, even with the anti-Asian hate nowadays where Asian people are killed on the street, persecuted on the street for no reason at all,” said Brocade Wu Harmon, president of the Organization of Chinese Americans San Diego chapter.

Following her comments, Harmon was invited to sit on the panel, and the event organizers — who at the start of the event had addressed the lack of Asian and Indigenous representation on the panel — shared that they were actively working to include even greater diversity in future events.