Help Us Finish Our Film – A Prayer Beyond Borders 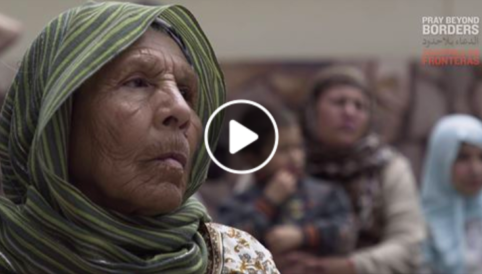 With our film, “A Prayer Beyond Borders,” we have captured something completely unique. A joint ceremony where Muslim and Christian communities unite to pray for an end to the inhumane realities unfolding in the southern borderlands. We are calling on our community to help us finish this narrative shifting short film and move into production on the feature-length version of the film. A set of donors have already committed matching funds for this campaign up to $7000 as we make the final edits of the short film that will be distributed by MoveOn. Our goal is to start production on the feature-length film in July.

Help us finish our short film, A Prayer Beyond Borders https://www.launchgood.com/praybeyondborders

A Story of Faith in Action 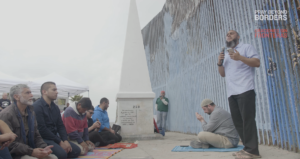 Along the thousand-plus mile US/Mexico border there is only one place where families who have been separated by immigration policies have the ability to meet, at Friendship Park. Here at this park with its double barrier fence in Tijuana/ San Diego, the Border Church has committed to holding a binational service every weekend to protect the right of families to meet in person. The Muslim community, similarly inspired to stand for justice in the borderlands, recently joined the Border Church for the first time to pray at the most militarized border in the world. This is the story of people coming together, across borders, across communities, across faiths, across languages, to stand united for justice and to pray beyond borders. 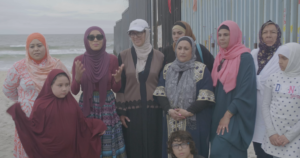 In working with the Border Church, we are putting prayer into action as a force of change on the border in a time of so much need. With this event in Tijuana, we began the process of breaking down mental and physical barriers between these communities, while also laying the groundwork for deeper community engagement on both sides of the border. The event organized by CAIR San Diego, the Border Church, the Latina Muslim Foundation and the Islamic Center of San Diego was so successful in connecting Muslim and Christian communities, that we are now in the process of having a monthly “Border Mosque” presence at Friendship Park in alliance with the Border Church.

The film is meant to highlight this unique moment and use popular culture to expand this story around the world by showing Muslims present at the border as agents of change. While we are beginning this film as a short distributed by MoveOn and the CAIR network, we recorded so much powerful imagery with our film teams on both sides of the border that we are now working on a feature-length film. In narratives constructed by this administration, President Trump has used the specter of ’terrorism’ and “prayer rugs at the border” to deepen his border wall campaign that ties Latino and Muslim communities together in his fear-based agenda. The narrative work we are constructing shows what is possible for Muslims as a group leading through our own worldview in a powerful and impactful way, a narrative we need more examples of as Muslims must take bolder social justice-oriented stances as we move into the 2020 election cycle.

A Prayer Beyond Borders connects Muslim, Latino, and Latino Muslim communities in a more intentional way while building long term relationships that will allow us to explore how Muslims in San Diego can be present on these issues in a deeper way.

A Global film team for a story beyond borders 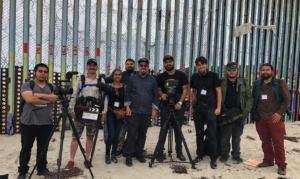 When we shot the film at the end of April we were blessed to work with a binational film crew of 15 with three teams. One team on the US side of the border, another on the Mexican side, and a team that recorded the border crossing with the Muslim community from San Diego. Shot in a cinematic style the camera as it cuts back and forth between the ceremony on both sides of the border is meant to represent the all-seeing eye of God as prayers flow between the wall in the realm of existence beyond human-made barriers. Produced by Dustin Craun, the film is co-directed by Reynaldo Escoto and Ala’ Khan who led this team of diverse emerging filmmakers. This short film is a production of CAIR California, MoveOn, and Beyond Borders Studios.

Help us finish our short film, A Prayer Beyond Borders https://www.launchgood.com/praybeyondborders