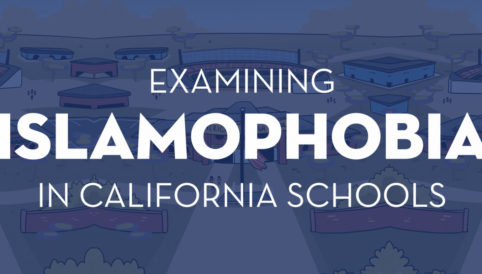 (SAN DIEGO, CA – 10/28/2021) – The California chapter of the Council on American-Islamic Relations (CAIR-CA) today published a new report documenting bullying and discrimination of Muslim students in California Schools showing that more than half of Muslim students surveyed say they experienced faith-based bullying, a figure that is more than twice the rate of the national statistics.

Some 55% of all respondents surveyed reported feeling unsafe, unwelcome, or uncomfortable at school because of their Muslim identity. This is the highest reported level since CAIR-CA began conducting its biennial surveys in 2013. Almost half of respondents (47%) reported being bullied for being Muslim in the year-and-half period prior to the COVID-19 pandemic. Post-pandemic, some 26% of students reported being bullied as a result of the decreased in in-person interactions amongst students.

To obtain the full report, go to: https://bit.ly/21Bullyingreport

“Muslim students continue to face high levels of Islamophobic bullying at school,” said CAIR California CEO, Hussam Ayloush. “It is disturbing that nearly one of three female respondents (30.12%) who wear a hijab, reported their hijab was tugged, pulled, or offensively touched. As students have resumed in-person learning, school districts must take proactive steps in these initial months to ensure learning environments across the state that are free from hostility and discrimination for their Muslim populations.”

The experiences of the last year-and-a-half of adjustments by school districts and educators demonstrates that change is possible when administrators are forced to action.

“The pandemic showed us that most school districts have a capacity to adapt and grow their learning models to support the safety and well-being of their students, and we commend them for that”, said CAIR San Diego Associate Executive Director, Tazheen Nizam. “These efforts also make it apparent that school districts have the capability to proactively protect their students against bullying resulting from Islamophobia and to implement a zero-tolerance policy against any form of discrimination. The CAIR-SD office invites San Diego county school administrators and teachers to connect with us in helping combat Islamophobia in our schools, Our teams can provide training, reading materials, and lesson plans that accurately portray Islam. Let us work towards a more inclusive way of learning and growth for our future leaders”

The report, titled “CAIR-California’s 2021 Bullying Report: Examining Islamophobia in California Schools,” is based on findings from a statewide survey of 708 Muslim students between the ages of 11 and 18. This report is the fifth in CAIR-CA’s series of biennial reports documenting the rates of bullying of Muslim students in California. The 2021 survey and report also examined how the pandemic affected the way these students experienced bullying.