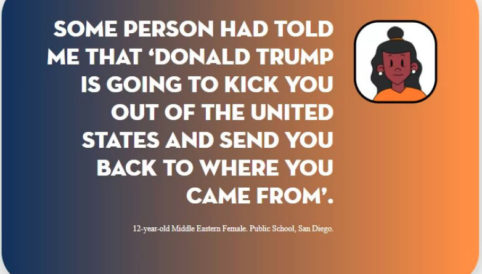 More than half of the students surveyed across California said they do not feel safe at school because they are bullied for their Muslim heritage, according to the report released Thursday by the California chapter of the Council on American-Islamic Relations (CAIR).

The report documents cases of bullying and discrimination against Muslim students in California. That’s the highest percentage that CAIR California has documented since the survey started in 2013.

“The kids that are being surveyed are right here. They go to school with your children and my children,” said Tazheen Nizam, Associate Executive Director of CAIR San Diego, which participated in the survey. “It’s not just Islamophobia. It’s any form of racial discrimination and any form of being different.”

Nizam said responsibility rests with parents and other adults who model behavior.