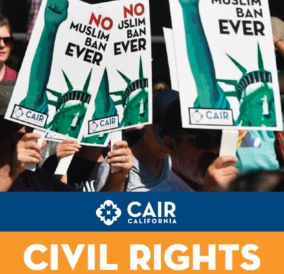 (San Diego, CA, 8/08/18) – The California Chapter of the Council on American-Islamic Relations (CAIR-CA) today announced the release of its annual civil rights report which reveals an 82 percent increase in reported incidents of religious-based discrimination, anti-Muslim bias incidents, and immigration matters to all four CAIR offices throughout the state from the previous year.

According to the report, CAIR-CA staff received a total of 2,259 incident reports in 2017.

Key highlights of CAIR-California’s report include a 503 percent increase in reported discriminatory treatment during travel from 2016 to 2017, driven primarily by the intentional discrimination encapsulated by the Muslim Ban. The number of immigration matters handled also increased significantly by 113 percent from 2016.

Of the 2,259 incidents in 2017, 1,551 were handled by CAIR-LA, 353 by the CAIR-SFBA, 200 by CAIR-SD, and 155 by CAIR-SV. CAIR-California’s Civil Rights Departments assisted community members in 386 travel-related matters, 197 hate incidents, 188 FBI and law enforcement cases, and 140 employment discrimination or accommodation matters.

Bolstered by the addition of two new programs in the CAIR-SFBA and CAIR-SV offices, CAIR-California’s Immigrants’ Rights Center assisted in 1,014 immigration-related matters, with an 145 percent increase in naturalization applications from the previous year.

“The relentless attack on our democracy has continued through the targeting of vulnerable members of our society namely Muslims, people of color, and those from immigrant backgrounds,” said CAIR-San Francisco Bay Area’s Civil Rights & Legal Services Coordinator Ammad Rafiqi, who authored the report. “This year’s Civil Rights Report highlights the ways in which institutionalized Islamophobia continues to erode constitutionally-protected rights for American Muslims.”

CAIR-CA today also announced the release of its individualized guides to Islamic religious practices for healthcare providers, educators, and employers. CAIR-CA’s new guides are being released in response to the rise in Islamophobia nationwide in the past two years and the increased interest from individuals and institutions in accommodating Muslims.

Note: These publications are intended only as a guide and are for informational purposes and not for the purpose of providing legal advice.

The Healthcare Provider’s Guide contains information about common Muslim religious practices and ways that they might impact health care decisions for Muslims and their families.

The Educator’s Guide focuses on the variety of ways that educators and school administrators can ensure that the religious practices of students are respected to ensure conducive learning environments for Muslim students.

The Employer’s Guide seeks to educate employers about the religious practices of Muslim employees and the legal duty to provide reasonable accommodations.