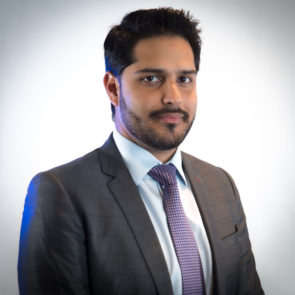 Ammad Wajahat Rafiqi is the Civil Rights & Legal Services Coordinator for the San Francisco Bay Area office of the Council on American-Islamic Relations (CAIR-SFBA). In this role, he is responsible for coordinating the work of the Legal Services team, including their representation of clients facing religious discrimination/denial of accommodation at work or in public spaces and law enforcement harassment, as well as their documentation of targeted hate towards American Muslims. He also facilitates workshops with impacted community members, allies, and others. Along with CAIR-SFBA’s Legal Services team, Ammad compiles and manages the production of periodic reports and publications about the state of civil rights in the Bay Area.

A native of Kashmir and Toronto, Ammad is licensed to practice in New York. He earned his J.D. from the University at Buffalo School of Law, where he was a student attorney in the Immigrants & Human Rights Clinic, which focused on assisting individuals and families seeking asylum and other immigration services, as well as on addressing racial disparities in criminal sentencing in Erie County, New York. His time as a Civil Rights Law Clerk with CAIR-Chicago impressed on him the need for the watchful, ceaseless advocacy of vulnerable communities in an era of economic and social upheavals.

Outside of his incredibly rewarding work with CAIR-SFBA, Ammad delights in sleeping in despite the guilt, hiking with regret at the state of his fitness, and playing cricket.